Facing anti-Semitism at her California school, this Jewish teen takes matters into her own hands 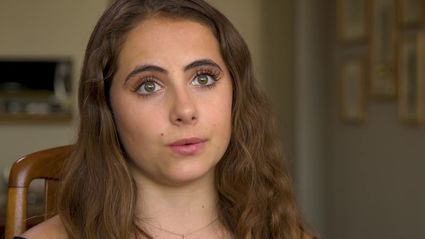 When Michaela Weinstein first encountered racist and anti-Semitic slurs at her California high school, she felt sick to her stomach.

Students at Albany High School, in the San Francisco Bay Area, were drawing swastikas on schoolbooks and posting photos on Instagram comparing black women to gorillas. Even two years later, anti-Semitism has remained a problem at the school: This fall, the outside walls of Weinstein's school gym were spray-painted with hate-filled graffiti.

"There were different slurs, anti-Semitic comments, the F-word, the N-word, and the words 'Swastika = good,'" Weinstein said. "Another one said, 'Get out of our country' and 'Free Hitler.'"

Weinstein and her classmate Melia Oliver decided to take action not long after they first encountered the problem. They and some friends created SPEAK, a program designed to encourage young people to identify and fight bigotry.

What makes this program unique is that the facilitators are high school students, who present workshops on social justice and empathy to fifth-graders in the local public school district. Weinstein and her group designed a curriculum for third-, fourth- and fifth-graders that focuses on combating prejudice and discrimination.

"We realized there was something about our education system that we needed to fix," she said. "There was apathy, and I think a lot of the things perpetrated at our school were done out of sheer ignorance about social issues. Education is the biggest way to cure ignorance."

On a recent morning, Weinstein, 16, visited a class of fifth-graders at a local school. She talked about racism and its historical manifestations, and then asked the students whether they had ever experienced racism themselves.

"They're 9 and 10 years old and they've already lived with anti-Asian and anti-black racism," Weinstein said. "It's easy to sweep bigotry under the rug because adults don't want to acknowledge that kids are going through this. But they are and they want to talk about it."

SPEAK's curriculum calls for teen facilitators to explain what prejudice is and that everyone has prejudices. It helps the children identify prejudice-their own and others'-and to work against it. The coordinators share examples of prejudice they or loved ones have experienced. They also talk with the students about how to try to stop prejudice in their communities.

"When your peers say something that you don't feel is right, find it within yourself to SPEAK up against that and politely tell them why you don't like WHAT (that) they said," the SPEAK curriculum says. "If we all work to improve ourselves, our world will change for the better."

Many of the school district's educators have embraced the program.

"Michaela's work is key to creating a more inclusive culture," said Darren McNally, coordinator of alternative education at Albany High. "As adults, it can be easy to forget that culture is often something that is communicated from student to student. Having older students intentionally ask what kind of schools they want to have, and then work to create it, is huge."

Earlier this year, Weinstein was awarded a 2018 Diller Teen Tikkun Olam award, which honors Jewish teens aged 13 to 19 for living the Jewish principle of tikkun olam-repairing the world and making it a better place. She and the 14 other winners each received a $36,000 grant from the Helen Diller Family Foundation to foster their leadership.

Weinstein says Judaism was the impetus for her first foray into social justice.

"Being Jewish gave me my first taste of activism," she said. "This was the first time I spoke publicly and took leadership."

She said that while she appreciated the funding that comes with the Diller Teen award, the real gift has been the opportunity to meet other young, driven Jewish teens who have a passion for social justice during the retreat the foundation ran for award winners.

"I was able to make really amazing bonds with other recipients," Weinstein said. "It can be a difficult task to go on in a world that feels so demeaning of so many people and full of hate. But when I'm surrounded by people who have a passion for tikkun olam, I'm able to get feedback and have a support system. It makes the task bearable."

This article was sponsored by and produced in partnership with the Helen Diller Family Foundation, which sponsors the Diller Teen Tikkun Olam Awards, annually awarding $36,000 to Jewish teens demonstrating exceptional leadership in repairing the world. Nominations/applications for 2019 are now open. This article was produced by JTA's native content team.