Danon warns UN: 'If Hezbollah dares to attack Israel, it will bring ruin to Lebanon' 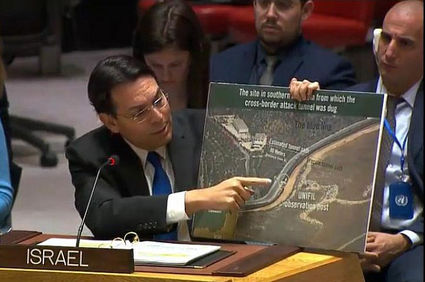 Israeli Ambassador to the United Nations Danny Danon at a special session of the U.N. Security Council on Dec. 19, 2018, shows an aerial photograph of the southern part of Kfar Kila, where an underground terror tunnel crossed the border into Israel. Credit: Permanent Mission of Israel to the U.N.

(JNS)-Israeli Ambassador to the United Nations Danny Danon warned the U.N. Security Council on Wednesday about the threat Hezbollah poses to the Jewish state, calling the terrorist group a "lifeblood" from Iran.

"Hezbollah has built a terror base inside a civilian population, with its end on the Israeli side of the border, all financed by Iran," he said in a special session of the U.N. Security Council. "This not only a clear violation of Resolution 1701, but Hezbollah also uses Lebanese civilians as human shields. If Hezbollah dares to attack Israel, it will bring ruin to Lebanon."

The special session of the Security Council was held on Wednesday following the revelation earlier this month of several tunnels dug by Hezbollah that extend into Israeli territory. Earlier this week, the U.N. Interim Force in Lebanon that said the Hezbollah had violated Security Council resolution 1701.

"After further technical investigations conducted independently in accordance with its mandate, UNIFIL at this stage can confirm that two of the tunnels cross the Blue Line. These constitute violations of U.N. Security Council resolution 1701," the peacekeeping force said in a statement.

During his remarks, Danon further revealed more evidence of Hezbollah's violations to the Security Council, including an aerial photograph of a "private compound" in the southern part of Kfar Kila, about 80 meters from an underground terror tunnel from the Lebanese border into Israel, nearing a UNIFIL observation post.

Danon also accused the Lebanese army of tipping off Hezbollah.

"Israel gave UNIFIL precise information about the location of the tunnel. After UNIFIL told the Lebanese army, it was then stopped when it tried to reach the area," said the ambassador. "Sources within the Lebanese army informed Hezbollah about the information, which enabled the terrorist organization to conceal the tunnel's operations and thwart Israel's defensive actions."

"Lebanese army officials are working for Hezbollah, while UNIFIL is not working to fulfill its mandate in the region in the necessary manner," he added.

During the session on Wednesday, Jean-Pierre Lacroix, the United Nations Under-Secretary-General for Peacekeeping Operations, echoed the UNIFIL statement from earlier in the week, saying that the tunnels that extend into Israel represent a "serious violation" of Resolution 1701.

Other nations also condemned Hezbollah for its violations of U.N. resolutions.

Similarly, the American representative, Rodney Hunter, said Hezbollah is a "serious and real threat," and urged the international community to take action against Hezbollah.

"There's a very big difference in what we're doing which is basically trying to protect ourselves in the sky from the openly declared goal to destroy us," he told reporters.

Netanyahu mentioned the shutdown of factories in Lebanon to improve the precision of missiles, which he said was "by Hezbollah and after I spoke at the U.N."

Regarding a resolution condemning the terrorist group, the prime minister said that the terror tunnels violate Security Council resolution 1701, which required all armed groups except the Lebanese Armed Forces-the official Lebanese military-to remain north of the Litani River following the end of the 2006 Second Lebanese War.

Netanyahu said that taking action to fix what is happening in Lebanon is "obviously long overdue."