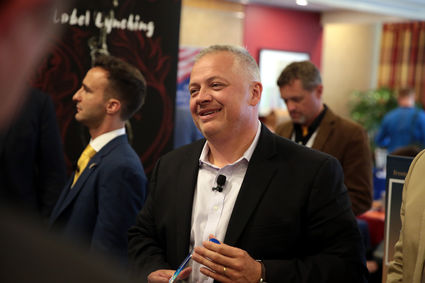 Denver Riggleman speaking with attendees at the 2018 Young Americans for Liberty National Convention at the Sheraton Reston Hotel in Reston, Va.

(JNS)-A bipartisan delegation of incoming members of Congress returned to the United States on Friday following a five-day visit to Israel.

I had a great visit with @USAmbIsrael. We were supposed to have a very brief meeting and he took an incredible amount of time with us. pic.twitter.com/qcLAZjZ9M0

Additionally, the delegation got a helicopter tour of the Gaza Strip, and Judea and Samaria, where they saw terror tunnels dug by Hamas.

We were invited to survey the Israeli border areas including the Gaza Strip and the West Bank. Then they took us to a military base to inspect the terror tunnels. Our return trip took us over Jerusalem, where we saw the security wall between the West Bank and Israel. #VA05 pic.twitter.com/DkZaOXejWr

I've had many moving experiences during our bipartisan trip to Israel. One of these was at Yad Vashem, Israel's official memorial to the victims of the Holocaust, where our congressional delegation laid a wreath at the Eternal Flame in the Hall of Remembrance. pic.twitter.com/XZdYIpIaBD

For Riggleman, who won against anti-Israel Democrat Leslie Cockburn in Virginia's 5th Congressional District last month, this visit to the Jewish state was not his first.

"I was in Israel during the bus bombings in 1996. I was Air Force enlisted, at the age of 26," he told JNS last month. "When I saw the strength of the Jewish people there, when I saw what they were going through, it gave me a new appreciation for some of the challenges in that area."

Luria, who defeated Republican Scott Taylor last month, told The Washington Post that it was her first time in Israel, and that she was moved by how U.S. support enables Israelis "to live in their communities in normal, secure lives without the fear of mortars and rockets falling on their roofs repeatedly when those types of activities do break out."