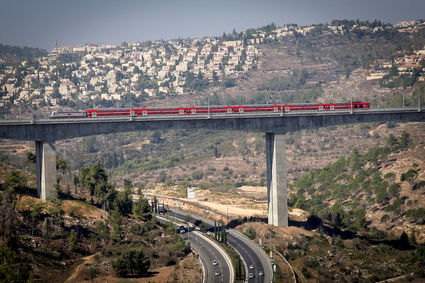 A view of the new Tel Aviv-Jerusalem fast train seen over the Haarazim valley just outside of Jerusalem, Sept. 25, 2018.

JERUSALEM (JTA)-As our train hurtled through the tunnel-my ears popping on the descent-and then burst out into sunlight bathing a landscape of fields and rocky hills, I finally let myself feel impressed.

Along with the entire population of central Israel, I've spent years anticipating the high-speed train from Tel Aviv to Jerusalem, which became (mostly) operational in September. When it's fully online, the trip between the cities is supposed to take 28 minutes.

That would be a game-changer. Four years living as a foreign correspondent in Tel Aviv meant that I would often find myself busing to Israel's capital once or twice a week to cover all matters political and religious.

For someone without a car, this meant taking a bus to the nasty Tel Aviv bus station, rushing up the stairs, bounding into the Tel Aviv-Jerusalem bus, sitting in traffic in a cramped seat, then exiting into the much-less-nasty Jerusalem bus station.

The 38-mile trip took at least an hour-and-a-half, door to door. It sometimes felt like friends in Jerusalem might as well have lived in New York.

Now, at long last, there is high-speed rail to Israel's capital-except it doesn't leave from or arrive in Tel Aviv. Because the tracks to Tel Aviv are not yet electrified, the fast train runs only as far as Ben Gurion Airport, where commuters to and from Tel Aviv need to transfer to regular-speed rail. So for now, including transfer time, the trip takes around an hour-about the same average time as the intercity bus. It's supposed to be finished soon, though there's no deadline.

In other words, there's a fast train from Jerusalem to Tel Aviv-except it isn't fast and doesn't go to Tel Aviv.

Still, I wanted to take it. So on Sunday morning, the beginning of Israel's work week, I rushed into Tel Aviv's Savidor Central Train Station and hopped onto a normal train to the airport. The high-speed Jerusalem line is right across the platform, but first all passengers need to walk through a makeshift metal barricade made of a succession of gates, where a train attendant checked our tickets one by one.

Once I made it through that gauntlet, the Jerusalem train felt eerily comfortable for rush hour. I was one of the few people on the upper deck, which meant I had an entire quartet of seats to myself and free use of the accompanying table and outlets.

(By contrast, as I write this, I am sitting on a weekday local train weaving its way through the Negev Desert en route to Tel Aviv. My quartet of seats is filled by a soldier, a woman who appears to be his mother and her backpack. He's trying to go to sleep, but keeps waking up to complain about having left an electronic device at home. I don't dare ask to use the table or outlets.)

The train may have been empty because a week earlier, it had spent more than an hour stuck in a tunnel between Jerusalem and Tel Aviv. To rescue that train, the railway had to haul in a diesel engine. A few days later, skeptical passengers may have been unwilling to take the risk.

That's not to mention the time it took to get the train running in the first place. Planning began in 2001, with a projected launch date of 2008 and a budget of about $1 billion. When the train started running last month, it was a decade late and nearly $900 million over budget. And it still doesn't go to Tel Aviv.

On Sunday, thankfully, I ran into no problems. For all of the hassle it involved, the actual train ride was a mix of tranquility and majesty. While in transit in Israel, I'm usually on my phone or computer. This time, I let myself enjoy the view through bulletproof windows.

We left the Tel Aviv area, traversing the lush green pastoral fields that separate Israel's two largest cities. Then we entered the first in a series of five tunnels, interspersed with bridges, that offered striking contrasts: The tunnels enveloped the train in pitch black followed by a sudden rush of color as we soared across the panorama of Israel's rocky hills. As we neared Jerusalem, I looked out, a little smugly, on the cars and buses crawling up the road to the capital. I could feel the train approaching 100 miles per hour, speeding us toward a 3,000-year-old city.

The Mishnah says, "All ascend to Jerusalem." But when the train enters the city, it's 260 feet below ground. To get from the Jerusalem train platform to the city takes another few minutes of riding up three massive escalators and a couple smaller ones-4 minutes and 20 seconds, to be exact. There are elevators on the other side, but that seemed less fun. 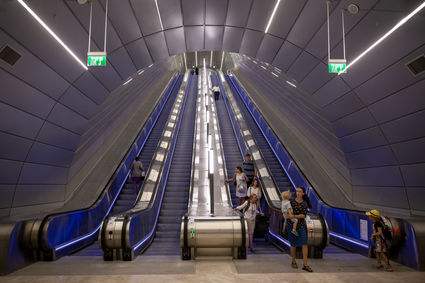 To get to Jerusalem's street level from the train, which is 260 feet below ground, it takes a few minutes of riding up three massive escalators and a couple smaller ones.

Like the train, the sparkling new station was oddly empty. The cavernous corridors are built to hold droves of commuters. Instead, on a weekday morning, they smelled of rubbery and plasticky newness, and felt sterile and lonely. Maybe that's because, as a recent study showed, only a handful of people actually commute between Jerusalem and Tel Aviv. The Taub Center for Social Policy Studies found that as of 2016, only 4 percent of Jerusalemites, and an even smaller number of Tel Aviv residents, traveled more than 24 miles outside their city for work. And that could mean anywhere in Israel, not just the other big city.

After a final short escalator ride, I found myself surrounded by Jerusalem stone and the din of its automobiles, people and putative prophets. A wide circle cut out of stone above a courtyard in the train station opens up to the sky, as if to suggest infinite possibilities or endless waiting for unanswered prayers.

From there it was on to haggling with cabbies, sitting in traffic and waiting in a security line-in other words, life as a foreign correspondent in Jerusalem.

Two days later I got one more chance to ride the train, again from Tel Aviv to Jerusalem. I hoped to again look out the windows, compare my notes, try to notice things I'd missed before.

Instead, I sat down on the train, pulled out my computer and got to work. I had a deadline to meet. I, unlike my train, would not be late.