Artist Stephen Gamson gets his own day in Miami Beach 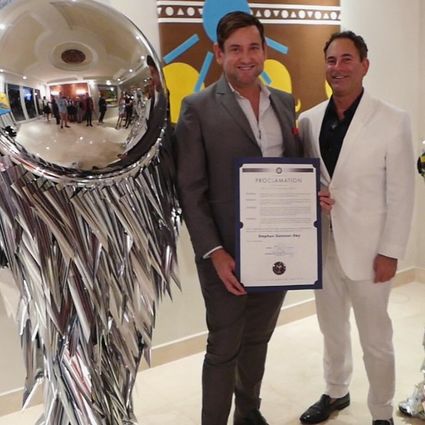 Ask people in the Miami area if they have heard of Stephen Gamson, and the majority will say a resounding "Yes!" He is so well known that Dec. 3, 2018, was proclaimed Stephen Gamson Day by City of Miami Beach Mayor Dan Gelber and Vice Mayor Michael Gongora.

The honor was bestowed upon Gamson during a pre-Art Basel party held on Fisher Island, an exclusive private island off the coast of Miami Beach.

Gamson was the featured artist at the party, a forerunner of the art festival held in Basel, Switzerland annually, and Miami Beach hosts the American version of this famous festival at the same time.

"This whole city transforms into the Olympics of the art world," Gamson told Miami.com. "To do something on this private island is very special."

When he was invited to the island, he was told to invite his friends as well. More than 1,000 people were on his guest list. The only way to get to the island is by ferryboat, and that was too many guests (plus cars) for the ferryboats to transport. So, Gamson had to uninvite many.

"That's the worst feeling ever to have to uninvite people," he stated.

According to Miami.com, music producer Timbaland, who was invited to the Island to attend the launch of his son's book at the same event, was turned away at the ferry because the quota of visitors was already met.

Gamson didn't receive the honor of having a day named for him for his artwork alone. The proclamation made by Gongora also stated "his artwork has made a positive impact through charitable causes. Gamson works from his Miami studio and gets much of his influence from its multi-cultural and vibrant surroundings. Thank you for your contributions to the betterment of Miami Beach."

Although Dec. 3 will not be annually recognized as his day, Gamson does plan to honor it each year doing something for the city and enlisting others to join him, whether it be feeding the homeless, picking up trash or something else to better the city.

How did this former Orlandoan become so famous in South Florida (and around the world)? Gamson, who grew up in Winter Park, is a multimedia pop artist. His iconic, bold and colorful works of art can be seen all over Miami, as well as in commercial artwork for Bacardi, Café Bustelo, and Lamborghini (he is proud to have designed an official Lamborghini Art Car in his trademark style) to name only a few of the many brands he has colorfully enhanced.

"It's based on a vocabulary of symbols, a visual language that represents the lifestyle we live. That's what it's about," he told Heritage while he was in town to celebrate the 55th anniversary of his parents, Bob and Elaine Gamson.

Gamson got his idea for his style while traveling in Russia. Not knowing the language, he had no trouble getting around by following the universal signs and symbols (i.e., the men and women silhouettes for restrooms, the wheelchair for handicap access). His art projects broke geographical barriers and have become universally recognized.

Gamson's love for art started at an early age. When he was 5, his mom enrolled him in art classes. "My teacher was Roz Brown and she lived in Palomar," he said.

His artistic flair wasn't limited to artwork. He has always considered himself different, even admitting that he was "a bit odd."

"As a kid, when my mom would tell me to put on my shoes, I'd put on one green shoe and one blue shoe. She'd let me express myself," he shared.

For Gamson, his upbringing paid off. His work is collected by A-list celebrities, such as English business magnate Sir Richard Charles Nicholas Branson and Prince Albert II of Monaco, who commissioned Gamson to custom design a Lamborghini for the 67th Monaco Grand Prix in honor of the Princess Grace Foundation. And he is proud to say that he has several collectors in Orlando. His paintings have sold from $3,000 to $60,000.

Gamson's artwork has turned up all over the world. His painting titled "At the Museum" is on permanent display at El Museo Casa Turquesta in Mexico, and in Europe one can spy his art on the red carpet at the Cannes Film Festival.

A project Gamson is currently working on is to host a non-partisan art auction featuring his creations at Mar-A-Lago on Feb. 2, 2019. The proceeds from the sales will go to veterans organizations in Florida. He is also designing a travel series of affordable and functional tapestry blankets of various icons in his style such as the Statue of Liberty and St. Basel's Cathedral in Moscow.

Gamson lives in Miami with his wife of one year, Yung. "She converted to Judaism and circled me back to it," he said. They are members of Temple Emanu-El in the South Beach district of Miami Beach. 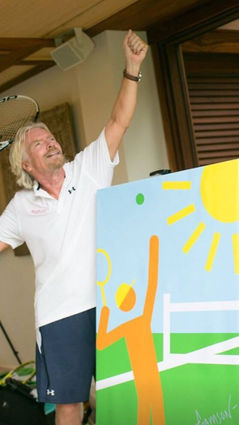