Cyclists put pedal to the metal to raise record $3.5 million for sick kids 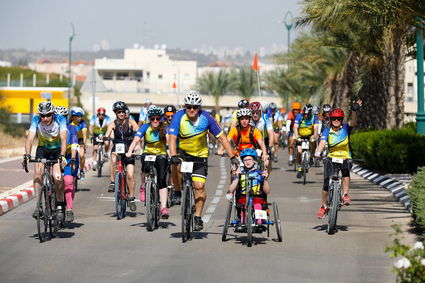 The five-day cycling tour, which offers a wide variety of routes for many riding levels, just finished up in Israel. The goal was to raise $3.2 million for children in ALYN Hospital in Jerusalem, a nonprofit medical center founded 85 years ago to rehabilitate sick kids as quickly as possible. By the end of the ride, that number reached $3,517,634.

It is the most comprehensive annual international sports charity event in Israel, attended by hundreds of riders and volunteers from the Jewish state and around the world.

Some 600 cyclists participated with the largest contingent of cyclists from outside Israel (nearly one-third) flying in from the United States. During the first three days, riders enjoyed challenging road and mountain routes in the south and Dead Sea region, and on the final two days the riders faced the inclines of the Judean Hills. At the end of the ride, cyclists from all routes converge and ride together with a police escort into the hospital, where they are given a hero’s welcome from current patients, the staff, friends and families who have gathered to pay tribute to their efforts and generosity.

“Coming into ALYN on the last day of riding is a very exhilarating, yet humbling experience,” says Ben Cohen, who cycles with the team AK Riders around his hometown of Woodmere, N.Y. “You have just completed five days of riding, accomplishing and overcoming many obstacles—heat, wind, rough terrain, crazy downhills, grueling uphills and then you see the kids, who every day of their lives wake up to great challenges … and they are giving us the medals!”

Harmon Grossman from Teaneck, N.J., has now completed the bike ride eight times. “People talk about all the holy sites in Jerusalem, but I can tell you that the holiest site in Jerusalem is that hospital, where professional and volunteers help kids from every corner of Israel overcome the most profound challenges that life can pose.”

He adds that “the final climb up to Jerusalem is always physically challenging, but when you ride into the hospital and there are these profoundly disabled kids waiting happily to see you and place a medal around your neck, well, I’m not embarrassed to tell you that I cry every year.”

It was Ron Offer’s sixth time participating. Offer, who trains for the ride in and around Silver Spring, Md., says the children of ALYN are the “real heroes/heroines” of the ride. “They struggle every day of the year, long after we have gotten off our bikes. They haven’t volunteered for the uphill effort on their part, and they can’t simply ‘stop riding’ when they want.  They fight and never give up every day.”

Indeed, the most inspiring group of participants are the patients and former patients themselves—the Swift and Bold ALYN Riders, who join in full or just for a day by riding on tandem bikes, on a hand cycle or even on a regular bike, according to their individual ability and under the guidance of dedicated volunteers.

“I feel amazing,” says 17-year-old Qais Oweis, who had just completed 50 kilometers of road biking on his hand bike for the second time. Qais, who can now walk assisted with crutches after having undergone multiple operations, has been rehabilitated post-operations at ALYN for months at a time.

Redefine themselves by their capabilities

Ruth Witztum, a physiotherapist in ALYN’s rehabilitation center, has run the Swift and the Bold for the past 7 years. A bike rider herself, in the first year at ALYN she rode in “Wheels of Love” as a participant.  The following year, she looked at the children that she was treating and thought that some of them could participate. In the beginning, the children and the families thought that it would be impossible. Some could not walk, some could only take assisted steps—and Witztum was asking them to ride 2-kilometer race!

But the children rose to the challenge, and Ruth saw a remarkable change. The “dreamed of” 2 kilometers became 10 kilometers; with that, the self-confidence of the children grew, as did the confidence of their parents. Parents had been so used to working schedules around treatment times that they had to “switch gear” and know that they were now arranging scheduling around training sessions. Children who could not participate in other after-school activities were now part of the group.

In Witztum’s words, “being on a bike has given these kids better health, independence and mobility. We just needed to find the right bike for each one. More importantly, being a successful rider enables them to redefine themselves no longer by their disabilities, but by their riding capabilities.”

Now the children, ages 10 to 22 years, train seriously with a group of volunteers for four months leading up to the ride. This year there were 15 members of the Swift and Bold Team,  who took to the off-road and on-road routes on tandems and hand bikes together with the other cyclists from Israel and abroad. 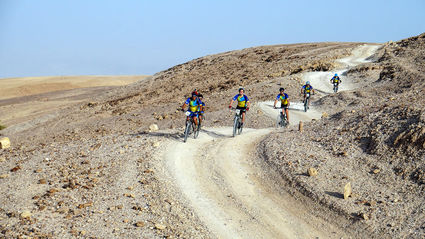 Donations collected as part of the campaign help bridge the gap between the hospital’s actual expenditure, the quality multidisciplinary rehabilitation treatment it provides and the reimbursement of the regular official payment received for each hospitalized child.

Dr. Maurit Beeri, director of the ALYN Hospital, explains that “funds raised allow us to give the children the treatments and therapies they require, rather than limit care to the basic needs covered by the Israeli national health-care system. Every extra penny goes towards additional therapists, a wider selection of emotional-support modalities, innovative interdisciplinary projects and more hands-on care. It helps give the child that extra chance that might just make all the difference in the world.”