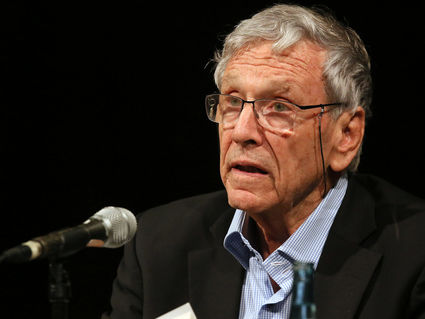 The Israeli writer Amos Oz reads from his book "Judas" at the award ceremony of the International Literature Prize in the House of World Cultures.

(JTA)-Amos Oz, one of Israel's most widely read and best-known writers, has died. He was 79.

The cause was cancer, the Israeli media reported.

Barely older than the country he chronicled in dozens of novels, essays and nonfiction books, Oz represented a generation of writers who traced the country's emotional arc from its adolescence to the present. He also was one of the country's most vocal peace activists, calling on successive governments to resolve the Palestinian issue and embrace what he called "the logic of demography and the moral imperative to withdraw from governing a hostile population."

In novels like "My Michael," "Black Box," "Where the Jackals Howl" and his 2002 autobiographical novel "A Tale of Love and Darkness"-later made into a film by and starring Natalie Portman-he drew on his own experience as a first-generation Israeli raised in Jerusalem and later a kibbutznik to tell intimate stories that were inevitably read-despite his frequent protestations-as political allegories. "A Tale of Love and Darkness" tells the story of his family's roots in Volyn (historic Volhynia), Poland, and his childhood in Mandatory Palestine where Oz-then Amos Klausner-was born in 1939.

Though his parents did not speak Hebrew at home, Hebrew was the language spoken by Oz as a boy, the language from which Oz the teenager forged a new last name and the language Oz the man would eventually write in, becoming a celebrated novelist whose oeuvre has been translated into dozens of languages, from Arabic to Chinese.

He won countless awards, including the Israel Prize, and his books have been translated into dozens of languages. For several years he had been mentioned as a candidate for the Nobel Prize for Literature.

Oz would often speak in the kind of tossed-off epigrams that come only with a lot of practice. But just when you wanted to smack him for his breezy erudition, he would redeem himself with a flash of spot-on-and hilarious-self-awareness.

In 2011, speaking at the 92nd Street Y about the novel he'd just published in English, "Scenes From Village Life," Oz said that 99 percent of the typical media coverage of Israel involves extremist settlers, ultra-Orthodox fanatics and brutal soldiers, "and 1 percent saintly intellectuals like myself."

If Jews were in the canonization business, Oz would have earned his wings on the basis of "A Tale of Love and Darkness," his 2002 novel cum memoir. Like so much of what he wrote, the book is not just autobiographical, but a biography of Israel itself. Although his story ends before he is out of his teens, the young Amos bears witness to the destruction of European Jewry, the height of the British mandate, a Hebrew renaissance in Jerusalem, the great Zionist debates (and debaters) of the day, the rise of the kibbutz movement and the birth of the state.

The book's brilliance is its blurring of personal memoir and national drama, as in an unforgettable description of the night in 1947 when the United Nations voted to partition Mandatory Palestine, giving international legitimacy to a Jewish state. His father, Yehuda Klausner, still "drenched in sweat from the crush of the crowds" celebrating the U.N. vote, crawls into bed with the young narrator. He tells the boy of the "hooligans" who tormented him and his brother back in Odessa and Vilna, and how the bullies forced the boy's grandfather "down on the paving stones and removed his trousers too in the middle of the playground."

His father continued, "Bullies may well bother you in the street or at school some day. They may do it precisely because you are a bit like me. But from now on, from the moment we have our own state, you will never be bullied just because you are a Jew and because Jews are so-and-sos. Not that. Never again. From tonight that's finished here. Forever."

In his 92Y talk, Oz explained that the book was neither a memoir nor a novel, but in fact a "tale," a designation that unfortunately has no category in the Library of Congress. Instead, "A Tale of Love and Darkness" combines Oz's strengths as both a novelist and a writer of impassioned political nonfiction-as he often would put it, he had two pens on his desk, "one pen to tell stories and another pen to tell the government to go to hell."

Oz died at a time when so many of the things he stood for-a vital Israeli left, a robust peace process, a vision for sharing the land-are in retreat, if not dead and buried. But even until the end, he never gave up trying. His latest book, "Dear Zealots: Letters from a Divided Land," published last month in English, contained essays on the rise of zealotry in Israel and around the world.

"Politically speaking, I have been engaged and involved in writing articles, making speeches for 60 years," he said. "Now it is my time, not to retire but to provide my ammunition, my experience to the younger generation and let them take it from here."