Russia struggling to stop the Iranian-Israeli shadow war in Syria 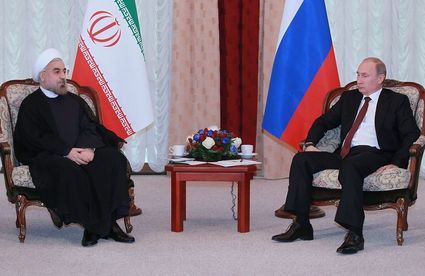 Russia issued a public rebuke to Israel, accusing it of conducting “provocative” attacks. The Russians also claimed to reveal operational details about the airstrikes, saying that six Israeli F-16 jets fired missiles at targets in Syria from Lebanese airspace.

According to the spokesman for Russia’s Defense Ministry, the strikes endangered two civilian airliners that were on their way to land at airports in Damascus and Beirut. The spokesman claimed that Syrian air defense intercepted most of the Israeli missiles—a claim that remains unverified, and which could be part of a face-saving effort on behalf of the Assad regime.

These comments reflect a wider Russian frustration over its failure to end a shadow Israeli-Iranian war that continues to rage in Syria. It is a low-profile conflict, mostly fought away from the headlines, in which Israel is playing an active defense against Iran’s offensive attempt to set up a war outpost in Syria. Hundreds of Iranian targets in Syria have been destroyed in the past 18 months alone.

Iran seeks to create weapons factories, missile bases and a Shi’ite army of 100,000 fighters in Syria, while Israel has no intention of letting it succeed. Iran’s tendency of using Syria as a transit zone for moving advanced weapons to Hezbollah, in neighboring Lebanon, is also a violation of an Israeli red line, which has triggered many reported airstrikes in the past.

This shadow conflict is a threat to the stability of the Bashar Assad regime. While the regime has no desire to get involved in a war with Israel and would rather focus on reconstruction, it is forced to issue “permits” to Iranian activities since Assad owes his existence to Tehran. Assad also gets dragged into the conflict when his surface-to-air missile batteries fire at Israeli aircraft, attracting Israeli return fire. When Iran uses Syrian military bases for its purposes, it also pulls the regime into the firing zone. These encounters are flashpoints that can escalate into a wider conflict.

Russia is not happy about such risks. It has invested military efforts to rescue the Assad regime from defeat, and it wishes to safeguard its investment.

In the process, Moscow has partnered up with radical Shi’ite forces led by Iran and Hezbollah, which were already neck deep in the battle to save Assad.

Now, however, the Syrian war is largely over, and Russian President Vladimir Putin wishes to convert his gains in Syria into geo-strategic benefits. Yet Moscow must now worry about a new conflict that could end up jeopardizing Assad.

Russia has already tried to put the brakes on Israel’s campaign in September. At that time, Syrian anti-aircraft fire, targeting Israeli jets, accidentally shot down a Russian intelligence aircraft, resulting in the loss of 15 crew members.

Russia blamed Israel for that incident and saw it as a turning point to restrict Israel’s activities. It armed Assad with advanced S-300 air-defense batteries as part of an effort to deter Israel. Yet the latest events show that when Israel sees a necessity to prevent a new threat from growing in Syria, it continues to act.

On the ground, Russian attempts to keep Iranian-backed forces away from the Israeli border have not been very successful. Shi’ite militias and Hezbollah units are deeply embedded among the Syrian army’s forces that stormed southern Syria earlier this year.

Despite Russia’s rebuke and posture against Israel’s actions, it is the Iranian axis that is jeopardizing the stability of the region.

Publicly, Russia is taking a stance against Israel alone, probably to avoid a showdown with Iranian-led forces on the ground in Syria, which Moscow still needs to keep the Assad regime safe. But behind closed doors, it seems highly likely that the Kremlin is not very pleased with Iran, Hezbollah and other members of the Tehran axis for attracting Israeli fire.

‘Not prepared to accept Iranian entrenchment in Syria’

Israel, for its part, is signaling absolute resoluteness to continue with its preventative active defense campaign. This campaign has two goals: disrupt the force build-up of the enemy and try to avoid an all-out conflict in the process.

The Israeli campaign is based on calculated risks, the most advanced intelligence imaginable and long-range precision firepower. These come together to form an Israeli gate around Syria, blocking Iranian plans to take over.

Comments made on Wednesday by Israeli Prime Minister Benjamin Netanyahu contained the latest signal from Jerusalem regarding its total commitment to continue this way for as long as necessary.

Speaking at an air-force pilot cadet graduation ceremony, Netanyahu said: “We are not prepared to accept the Iranian military entrenchment in Syria, which is directed against us. We will act against it vigorously and continuously, including during the current period.”

Netanyahu made clear that a decision by U.S. President Donald Trump to withdraw American troops from eastern Syria will have no effect on Israel’s preventative policy.

Warned the prime minister: “We stand firm on our red lines in Syria, and every other place.”