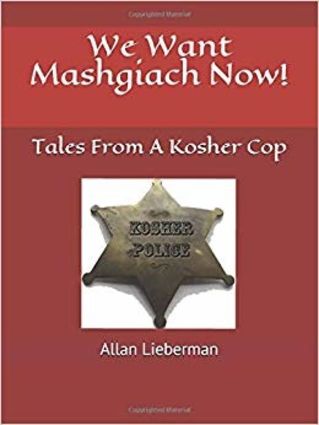 In his new book, “We Want Mashgiach Now—Tales From A Kosher Cop,” Allan Lieberman tells what’s really going on behind the kitchen doors in the Kosher food service business.

Lieberman, a South Florida mashgiach (Kosher Food supervisor) has put together a witty and entertaining account of some of his on-the-job experiences. Always humorous, sometimes irreverent and often educational, each chapter tells the story of incidents that occurred at Kosher restaurants or events and in kitchens of Kosher caterers (names have been withheld to protect the perpetrators).

“Chefs can be very temperamental and behave badly,” states Lieberman. One chapter, called Psycho Chef, tells of such a chef who revels in intimidating others with his 12” butcher’s knife. His anti-social behavior featured a twisted sense of humor. He found it amusing and couldn’t stop chuckling when the mashgiach suffered second degree burns as a result of spilling hot oil on his hand.

The author explains that communications in the kitchen can be difficult when English is the second language. “Once I asked a Haitian dishwasher to wash the sink which was used for washing and rinsing vegetables so they could be checked for bugs” relates Lieberman. Shortly thereafter he returned to find the sink unwashed and the dishwasher sitting in a chair beside it.  “He thought I asked him to WATCH the sink, not WASH it” Lieberman explains.

Readers who are unaccustomed to Kosher terminology will learn why many religious Jews will only drink mevushal (cooked) wine and why baked goods must be Pas Yisroel (oven cannot be lit by a non-Jew). A glossary is included which explains all terms.

“We Want Mashgiach Now—Tales From A Kosher Cop” is available on Amazon.com or can be bought directly at http://www.koshercop.net.