Jewish community of Jordan Valley: 'Bedouin carrying out a mass-scale takeover of land' 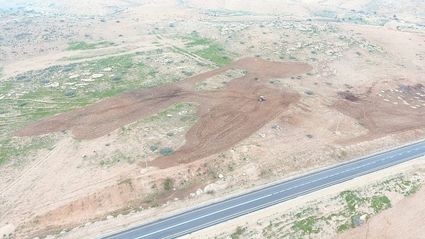 (JNS)-Residents of an illegal Bedouin outpost adjacent to Maskiyot were served with demolition orders. But instead of pulling up stakes, they are carrying out a takeover through agricultural projects on state land-land that is registered to the state, straddling the area's major traffic artery, in an area under military closure orders.

The Bedouin residents of the illegal outpost, which has grown significantly in recent years thanks to the support it receives from the Palestinian Authority and a consortium of European organizations, have begun to cultivate a huge tract of land, using heavy equipment, in an attempt to establish facts on the ground that will be very difficult to reverse.

"It should be clear that seemingly innocent agricultural activity has significant legal ramifications," says Yishai Hemo, Regavim's Field Coordinator for Judea and Samaria. "According to the system of law in force in Judea and Samaria, agricultural use enables squatters to establish certain legal rights to the land. In this case, as in others, despite the fact that the land in question is state-owned and is registered as such in the Land Registry, if the Civil Administration fails to enforce the law at the earliest stage, the result will most likely be a long, drawn-out, exhausting legal battle which, the government often simply does not bother fighting."

The agricultural takeover at Maskiyot is only one of many such cases. "The Roots of Evil" report, released by Regavim in December, contains a detailed survey of the full extent of the methodical program of agricultural land-seizure being carried out by the Palestinian Authority and its foreign supporters.

This program, the P.A.'s "Roots Project," aims to disrupt the territorial contiguity of Israeli control in Area C, and to enable the P.A. to claim ownership of the land under the current system of law.

Each individual tract of state land that is overtaken by P.A.-sponsored agricultural work is part of the larger Arab vision of mass-scale seizure of Israeli-controlled territory. Every olive tree that is planted, every terrace that is built, strengthens the Arab hold on the territory and establishes facts that may become immutable down the line.