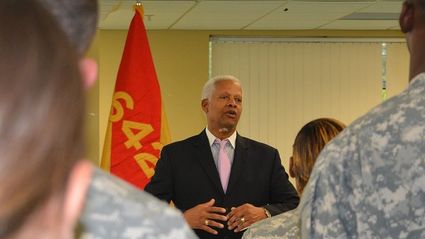 "The Jewish people know a thing about tyranny," said Johnson at the Atlanta NAACP event to commemorate the 156th anniversary of the implementation of the Emancipation Proclamation, which ended slavery in the South during the Civil War.

"Americans, particularly black Americans, can't afford to make that same mistake about the harm that could be done by a man named Hitler or a man named Trump," he added.

Johnson, who has compared Jews to "termites" in the past, bashed the president's supporters.

"Americans elected an authoritarian, an anti-immigrant, racist strongman to the nation's highest office," he said. "Donald Trump and his 'Make America Great Again' followers, who want to return America back to a time where white men and white privilege were unchallenged, and where minorities and women were in their place. These folks now control the highest office in the land."

"Donald Trump's supporters are older, less educated, less prosperous, and they are dying early," he added. "Their lifespans are decreasing, and many are dying from alcoholism, drug overdoses, liver disease or simply a broken heart caused by economic despair."

Johnson expressed no regrets after comparing Trump to the one responsible for the deaths of 11 million people-6 million of whom were Jews.

"I wanted to make the point that our democracy is under severe threat, that freedom is threatened, and that if we are not vigilant we can allow tyranny to set in," he told The Atlanta Journal-Constitution. "I made the point that this threat to democracy is a trend across the world, and we can't let this happen in our country."

'Unconscionable and uncalled for'

Jewish scholars and organizations criticized Johnson for his remarks.

The Emory University professor pointed to her June 2018 piece in The Atlantic, warning about comparing Trump's family-separation policy at the U.S.-Mexico border to the Holocaust: "Using historically invalid analogies gives those responsible for these outrages a chance to wriggle out from the avalanche of justified attacks on their policies. It gives them the opportunity to shift the conversation to the appropriateness of the comparison and the precision of the parallel."

"Congressman Johnson is an embarrassment to the people of Georgia and a master of offensive remarks," said Republican Jewish Coalition executive director Matt Brooks in a statement.

"[He] continues to demonstrate his defective understanding of reality with his latest outburst. His remarks about President Trump are unconscionable," he added. "The fact that Johnson serves on the Judiciary Committee and the Transportation and Infrastructure Committee-and may be a judiciary subcommittee chairman in the new Congress-is mind-boggling."

The Anti-Defamation League responded tepidly in a statement: "We appreciate Rep. Johnson's strong stance against anti-Semitism and his focus on the need to treat all people with dignity. As we've said before, we believe all people must be extremely careful in drawing comparisons to the Holocaust or the Nazi regime in whatever context. The lesson that should be reinforced from that dark time is that all good people need to speak out clearly and quickly when morally abhorrent actions are taken by those in power against any group."

However, Rabbi Abraham Cooper of the Simon Wiesenthal Center did not mince words.

"Dealing with a seasoned politician" like Johnson, Cooper told JNS, making these remarks in a church makes it "all the more concerning" and is a "way to get media attention" that "comes with a price."

"Tying up an emotional package," he said, the comparison was "unconscionable and uncalled for."