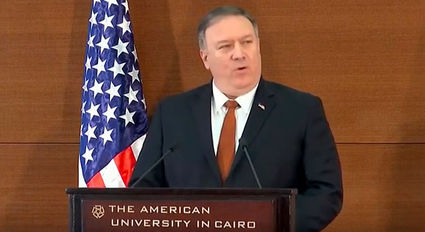 U.S. Secretary of State Mike Pompeo delivers a speech on the Trump administration's Mideast policies at the American University in Cairo on Jan. 10, 2019.

(JNS)-U.S. Secretary of State Mike Pompeo slammed the Obama administration's Mideast policies, which were outlined in a similar venue almost a decade ago, and touted their reversal under U.S. President Donald Trump, saying that "America is a force for good in the Middle East."

Without mentioning former President Barack Obama by name, he said at the American University in Cairo: "It was here, in this city, another American stood before you. He told you that radical Islamist terrorism does not stem from ideology.

"He told you that 9/11 led my country to abandon its ideals, particularly in the Middle East," he continued. "He told you that the United States and the Muslim world needed 'a new beginning.' "

Pompeo said that as a result of Obama's mindset, U.S. policies created a "dire" situation that allowed for the rise of the Islamic State and for Iran to spread its influence to countries such as Iraq, Yemen, Syria and Lebanon, including proxies such as Hezbollah and the Houthis. He said that this realignment threatened America's ally, Israel.

"Our penchant-America's penchant-for wishful thinking led us to look the other way as Hezbollah, a wholly owned subsidiary of the Iranian regime, accumulated a massive arsenal of approximately 130,000 rockets and missiles," he said. "They stored and positioned these weapons in Lebanese towns and villages in flagrant violation of international law. That arsenal is aimed squarely at our ally Israel."

He also accused Syrian President Bashar Assad of genocide towards his own people, similar to what Saddam Hussein did to his people, including the Kurds, in Iraq during his own rule.

"Our eagerness to address only Muslims and not nations ignored the rich diversity of the Middle East and frayed old bonds. It undermined the concept of the nation-state, the building block of international stability," continued Pompeo. "And our desire for peace at any cost led us to strike a deal with Iran, our common enemy."

"So today, what did we learn from all of this? We learned that when America retreats, chaos often follows," he said. "When we neglect our friends, resentment builds. And when we partner with enemies, they advance."

"The age of self-inflicted American shame is over, and so are the policies that produced so much needless suffering," he said.

'This isn't a change of mission'

The top U.S. diplomat proceeded to highlight the Trump administration's accomplishments in the region in that "we've learned from our mistakes. We've rediscovered our voice. We've rebuilt our relationships. We've rejected false overtures from our enemies."

Pompeo cited examples such as the U.S. launching missile strikes in response to Assad chemically gassing his own people in 2017 and 2018; the U.S. withdrawal from the 2015 Iran nuclear deal; and the reimposition of sanctions on the Islamic Republic. And that "99 percent of the territory ISIS once held is liberated," he said.

"The Trump administration has moved quickly to rebuild links amongst our old friends and nurture new partnerships," added Pompeo.

Moreover, announcing future plans, he said that "America will not retreat until the terror fight is over."

"We will labor tirelessly alongside you to defeat ISIS, Al Qaeda and other jihadists that threaten our security and yours," he said. "President Trump has made the decision to bring our troops home from Syria. We always do and now is the time, but this isn't a change of mission" in eradicating ISIS and other Islamic terrorism.

Pompeo reiterated that the United States will continue airstrikes against ISIS and support regional forces, such as Israel, to stop Iran in Syria and other places.

Finally, Pompeo said that the Trump administration "will also continue to press for a real and lasting peace between Israel and the Palestinians," and touted its accomplishments there such as relocating the U.S. embassy from Tel Aviv to Jerusalem, recognizing the latter as the Jewish state's capital.

The speech was part of a weeklong visit to the Middle East by Pompeo.