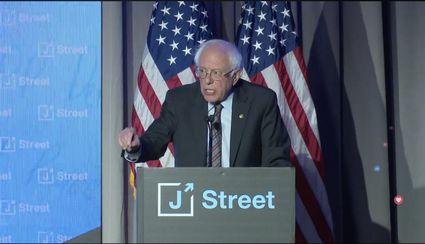 WASHINGTON (JTA)-Sen. Bernie Sanders said it was "absurd" for Republicans to introduce as the Senate's first bill of this Congress a measure that would protect states that penalize Israel boycotters.

"It's absurd that the first bill during the shutdown is legislation which punishes Americans who exercise their constitutional right to engage in political activity," Sanders, I-Vt., said Sunday on Twitter, linking to an article in The Intercept about the legislation.

President Donald Trump says he will not sign any funding legislation that does not include over $5 billion for a wall with Mexico, triggering a government shutdown entering its third week.

"Democrats must block consideration of any bills that don't reopen the government," Sanders said. "Let's get our priorities right."

Sens. Marco Rubio, R-Fla., and James Risch, R-Idaho, last week introduced the first bill to be considered in the Republican-led Senate, consolidating four measures that languished in the last Congress. One codifies into law $38 billion in defense assistance for Israel over 10 years; another protects states that pass laws targeting the Boycott, Divestment and Sanctions movement targeting Israel, including states that ban contracts with Israel boycotters. Civil libertarians have decried the laws as infringing on free speech.

Rep. Rashida Tlaib, D-Mich., a Palestinian American newly elected to Congress, quoted Sanders' tweet and appeared to allege that the senators backing the bill were more loyal to Israel.

"They forgot what country they represent," she said. "This is the U.S. where boycotting is a right & part of our historical fight for freedom & equality."

The bill's other two provisions strengthen the U.S.-Jordan relationship and enhance sanctions against Syria's Assad regime.

Sanders, an Independent who caucuses with Democrats, mounted a surprisingly strong challenge in the 2016 Democratic presidential primaries against Hillary Clinton, becoming the first Jewish candidate to win major-party nominating contests. He has hinted he may run again in 2020. Sanders has emerged as the leader of progressives in the Senate.

The first bill to be considered in the U.S. House of Representatives, newly led by Democrats, tackles political corruption and voting rights.