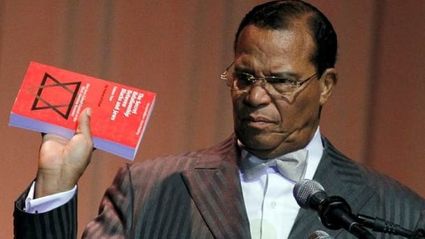 Bigotry at its worst...

"Following outrage from the World Jewish Congress and other leading Jewish groups, the online streaming giant Netflix cancelled the release of a documentary that celebrates the life of Nation of Islam leader and prominent anti-Semite Louis Farrakhan.

Farrakhan, who has had a long history of bigotry and anti-Semitism, recently delivered vile remarks referring to the 'Satanic Jew and the Synagogue of Satan.'

He continues... 'Whenever you read that God has told the Jews to hear and obey, and they say, "I hear and I disobey," that's Satan. (The Jews are openly disobeying God, Farrakhan said. He continued... 'He (a Jew) will take down the whole world with him.'

Betty Ehrenberg, executive director of the WJC, North America, said of the film, 'At a time when Netflix has announced that it plans to bring more faith and family based shows to its subscribers, its choice of offering a film on the life of Nation of Islam leader Louis Farrakhan is deeply dismaying.'

She continued... 'Anyone familiar with the frequent bigoted, anti-Semitic statements Farrakhan has made continuously over many years can only be shocked at this puzzling and incomprehensible choice.' She added... 'His vicious tirades are replete with the most anti-Semitic and libelous canards and threats, putting him in the same category with the worst haters of the Jewish people.'

Unfortunately, at a time when anti-Semitism is again on the rise, Farrakhan reaches a wide audience, spewing poisoned rhetoric at conferences and in media outlets, including social media, garnering supporters, even among some public figures and celebrities.'"

While watching the Golden Globes on television recently, the Lifetime Achievement Award (1st ever for TV shows) was given to CAROL BURNETT. The audience stood and applauded. I was already in bed but I felt compelled to also stand up and applaud. What a great show she had! I laughed so much, but most of all when she did a scene with the late, great Harvey Korman as Clark Gable's Rhett Butler and Carole as Vivian Leah's Scarlet O'Hara, where she comes down a staircase wearing a curtain rod. (I never laughed so hard in my (long) life!

The Congregation Ohev Shalom Seniors will meet on Sunday, Feb. 3 at the synagogue, 613 Concourse Parkway South, Maitland, beginning at 2 p.m.

Singer, guitarist and keyboard player for the "Rollabels", ANDY COSTANTINI, will be the featured entertainment. Everyone is welcome.

Admission is $5 for members, $8 for nonmembers.

Lots of noshes are included! (No calories!)

For further information, contact COS Seniors President JERRY LEIBMAN at 407-694-0546.

Three Cheers for BEN BRESLAUR of Ben's Bakery. During the years he was in business, Ben donated to the Jewish Pavilion thousands of loaves of challah for its elders.

NANCY LUDIN,CEO, comments "He was so incredibly generous with his time and talent. Prior to Jewish holidays, Ben would often over bake and call to ask me to pick up the leftover challahs to deliver to elder-care communities. Often I arrived with more than 30 loaves of challah."

She adds, "We are very thankful for his full participation in the Jewish Pavilion inter-generational challah bake. Ben instructed children and adults in the art of braiding challah.

He will return to Cascade Heights for an inter-generational hamantashen bake on March 22 at 2 p.m.

We are absolutely thrilled to have Ben as a new Jewish Pavilion volunteer baker."

For more information on the Hamantashen Bake, contact the Jewish Pavilion at 407-678-9363.

On Monday, Jan. 28th, beginning at 1 p.m., there will be a Cogniciti Brain Health Workshop.

(My son, the psychologist, said I MUST attend!)

Benjamin woke up one Saturday morning in a bad mood. When he came down to breakfast, he put on his yarmulke and sat across the table from his visiting sister, Sarah.

"I'm not going to shul today!" he said to Sarah emphatically.

"Yes you are." Sarah replied calmly.

"No I'm not... I don't think I really want to ever go again!" Benjamin said with obvious irritation. "The people down there don't like me, they ignore me sometimes... they don't appreciate me at all... and I won't go back."

"Yes, you will go today, and you will continue", said Sarah with confidence. And, I'll give you two reasons. Number one, you're 45 years old... and Number two, you're the rabbi!"