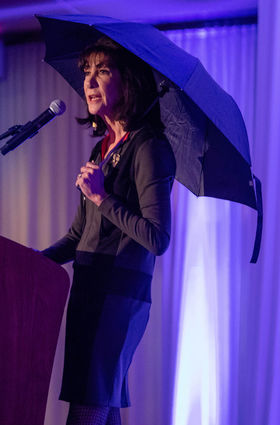 Courtney Shapiro Photography In her welcome remarks, Loren London used an umbrella to illustrate the symbiotic relationship between the Federation, local Jewish organizations and the community.

For its 25th installment, Choices, the Jewish Federation of Greater Orlando's signature women's philanthropy event, returned to the simple elegance that marked its beginning, with a festive cocktail hour followed by a seated dinner at Congregation Ohev Shalom in Maitland.

The 250 women and men in attendance were welcomed to Choices 2019 by Loren London, the woman who brought Choices to Orlando 25 years ago. London is also the first Harriet Ginsburg Woman of Choice Award winner.

London, the founder and director of the Federation's RAISE program for adults with special needs, kicked off her discussion by focusing on the evening's theme, Celebrating Women's Empowerment.

"To me, a conversation about empowerment begins with recalling the generations of women in Central Florida upon whose shoulders we stand," she told the crowd. "By attending tonight's 25th Choices, we honor those who paved the way as we exercise our strength in support as we continue to stand up for women."

London then asked various groups of women to stand up and remain standing based on their work, philanthropy, volunteerism and other involvement in Jewish causes. By the time she reached the end of her list, every woman in the room was standing, a testament to the contributions all have made to the Jewish community.

After dinner, attendees heard from Michelle Sheplan and Dori Gerber, both alumni of the Jewish Women's Renaissance Project Momentum trips to Israel, which are underwritten in part by the Federation in collaboration with SPARK. Both Sheplan and Gerber spoke passionately about how the Israel trips touched their lives and inspired them to get more deeply involved in the Greater Orlando Jewish community.

Sheplan said the personal connection she made with the other women on the trip is a testament to the common ideals shared by Jewish women.

"As the trip unfolded, each of the women in our group became more and more open and vulnerable... sharing bits and pieces of our personal stories of what makes us who we are," Sheplan said.

"And while we are all from different backgrounds with different experiences, we are ultimately so similar in that we, and all the women in this room, are the glue that binds our families as well as this Central Florida Jewish community together."

Gerber echoed that sentiment, characterizing the eight-day trip as a life-altering journey.

"The experiences I had on that trip helped to elevate the Jewish practices my family and I share in our home since my return," Gerber said. The trip "helped to change the trajectory of my career in education and my contribution to Jewish education and advocacy work."

As a result of the connections she made during the trip, Gerber got involved with, among other organizations, the Jewish Council for Public Affairs, which is the hub for 16 national Jewish agencies and more than 125 local Jewish Community Relations Councils, including the Orlando JCRC, which is a committee of the Federation. Gerber currently is the co-chair of the Orlando JCRC.

The evening's featured speaker, Lynn "Moira" Dictor, was a big hit with the audience, her trademark wit on full display while sharing her take on women's empowerment through the eyes of "Orlando's favorite Jewish mother."

Federation staff said Dictor's talk was pitch-perfect and made for a fitting end to the evening. 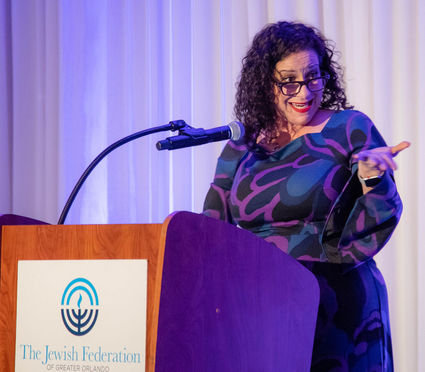 "The feedback we received after Choices was overwhelmingly positive," said Choices coordinator Marisa West, JFGO's office manager. "We really seemed to capture the right mix of socializing and fundraising, and Moira's presentation left the women smiling and laughing as they headed home."

The Presenting Sponsor for Choices 2019 was Orlando Health Winnie Palmer Hospital for Women & Babies, which provided healthcare literature and a few goodies for attendees to take home. President Kelly Nierstedt also spoke to the crowd, emphasizing the importance of preventive health care strategies for women.

More photos from Choices 2019 can be viewed at http://www.jfgo.org/choices.