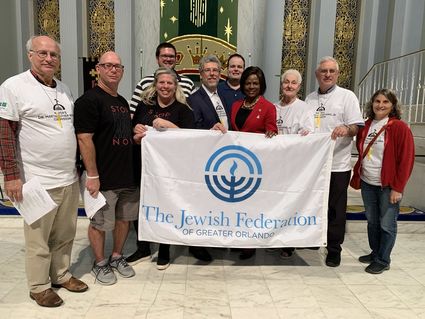 The Jewish Federation Jewish Community Relations Council members were among more than 100 people who participated in a march through downtown Orlando that culminated with an interfaith ceremony at the United Methodist Church of Orlando on Sunday, Jan. 13.

The ceremony, themed "Discord into Symphony," brought together faith leaders of all kinds.

Mayor Buddy Dyer welcomed all who participated. The program continued with the audience listening to recordings of some of Martin Luther King Jr.'s most famous speeches.

"I believe that love triumphs over hate, and I think we all have a responsibility to speak out against injustices in society," said Rep. Val Demings (D) in an interview with WESH TV news.