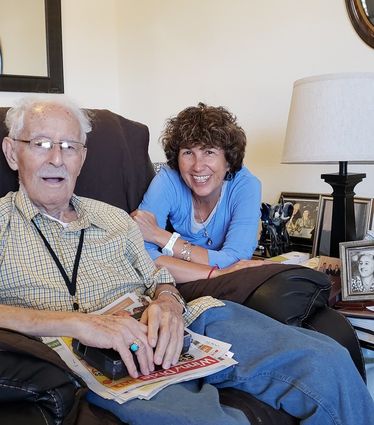 On a brisk early January morning, Randi Cunningham entered the graciously appointed lobby of Oakmonte Village's Cordova building and greeted the desk attendant with a wave and a smile. As a volunteer for the Jewish Pavilion, making visits to the rooms of Jewish residents a few times a month for the past few years, Cunningham is a familiar sight at this Lake Mary assisted living facility.

Consulting her list of current Jewish residents, Cunningham planned a route for making her visits. The first resident wasn't home when she knocked on her door; the next wasn't feeling well, so Cunningham wished her well and left her with a chocolate and a Jewish Pavilion greeting card.

When she reached the next door, Elaine Hendelson welcomed her in with a big smile, wishing her a happy new year. Hendelson was getting ready to go to an activity, so they chatted briefly about Hendelson's grandkids and shared small bits of news since the last time they had met. Asked how she was doing, Hendelson said, "Very well, no complaints. I'll bet you don't hear that very often!"

Cunningham knows that even a short visit from a member of the Jewish community can mean a lot to a Jewish resident in assisted, memory, or skilled-nursing care, because it meant a lot to her father. Before she became a volunteer, her father was a resident in this building, eventually moving to the memory-care building next door before he passed away.

"I moved my dad up here from South Florida," said Cunningham. With his health failing, she needed him to be near her Longwood home so she could see him frequently and monitor his care, but she was concerned because he had always lived in communities with predominantly Jewish populations. She knew that Oakmonte had a large number of Jewish residents by Orlando standards but wasn't sure how comfortable he'd feel there.

"I was just thrilled to see what Pavilion was doing," Cunningham said. "It was very nice on the holidays and to have the Shabbats. Whatever they did was wonderful. It was something he really appreciated."

Especially appreciated were the one-on-one visits from Pavilion staff and volunteers, a time to chat and share a laugh or a smile. "When I'd go see him, I'd find little notes that someone had visited," Cunningham said. Eventually, she began doing some volunteering of her own, both leading Jewish Pavilion Shabbat services at Oakmonte's Siena memory-care building and making the room visits.

She encourages others to volunteer with the Pavilion's visiting program because it is both flexible and rewarding. "It's a really good volunteer opportunity because it is lower commitment, more on my schedule," Cunningham said. "There's enough people that there's always someone happy to see you, so it's an easy thing to sign on to."

When she visits, she doesn't go empty handed. "I usually bring some sort of little food item," said Cunningham: delicacies such as halvah, rugelach or chocolates, as at her recent visit. Some are donated to the Pavilion, and others she brings on her own. More important are her friendly presence and willingness to listen and to talk. "I try to just sit down and visit the same way I would visit if it was a relative or family friend," she said.

After leaving Hendelson's room, Cunningham went to visit with Harry Starr, an inveterate kibitzer whose company she always enjoys. Starr had been dozing a bit in his lounger chair, but his face lit up when he saw who had come to see him. Cunningham settled in for a nice long visit as Starr began an extended joke about a man who went to his rabbi because he wanted to have a bar mitzvah for his pet monkey.

Then, remembering that he was a host, Starr offered Cunningham some bagels and lox he had in his refrigerator. "They're fresh!" he assured her when she begged off. The conversation soon turned to their Jewish backgrounds and their former rabbis and congregations. Starr talked of his parents, who were born in Poland, describing how they made wine by stomping on grapes and kept kosher and were involved in their Midwestern synagogue.

As with any two friends who enjoy each other's company, they ranged from topic to topic: personal details about their families, the places they'd lived over the years, and how they met their spouses, and more topical subjects such as intermarriage and the current president.

The next day was a Friday, and Starr was looking forward to the Jewish Pavilion Shabbat services, where he makes the kiddush and enjoys joining in the prayers as Susan Bernstein, a Pavilion program director, leads the service. "She's wonderful," he said.

When it was time to leave, Starr's smile lit up. "I love talking to you-it's a nice visit," he told Cunningham. Then he left her with a Yiddish blessing: "Gay gezunt un kum gezunt"-go in good health, and return in good health.