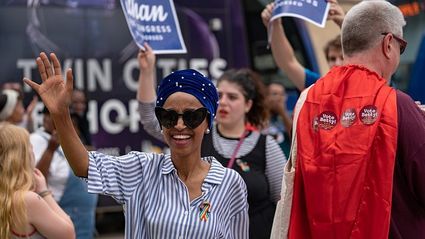 (JNS)—It didn’t take long for Jewish and Israel-related groups to react to the appointment of anti-Israel Rep. Ilhan Omar (D-Minn.) to the House Foreign Affairs Committee.

Along with several other new members of Congress, Omar has gained considerable attention as part of a new generation of leadership. Yet the Jewish community has grown concerned over her stances, particularly on Israel. Omar has tweeted that “Israel has hypnotized the world,” and has posted that Israel is an “apartheid” state, in addition to voicing her support for the BDS movement.

As such, her appointment to the powerful House Foreign Affairs Committee, which has jurisdiction over bills and investigations related to the foreign affairs of the United States, has raised alarm bells in the Jewish community.

The Zionist Organization of America condemned the move in a letter to House Speaker Nancy Pelosi (D-Calif.), calling it “a deeply mistaken, unwarranted, unjustifiable and dangerous development.”

“Your appointment of Representative Omar sends a frightening message that vicious anti-Israel actions and anti-Semitism is acceptable, and thus serves to mainstream and legitimize anti-Semitism and Israel-bashing—something we would have thought would be anathema to the Democratic Party or any respected American political party,” said the ZOA. “It would appear that her appalling anti-Israel record is not only being entirely ignored by the Democratic Party but, what is far worse, is being richly rewarded. What other conclusion is possible when the Democratic Speaker of the House appoints her to a coveted seat on the House Foreign Relations Committee?”

The organization warned: “Your actions will add to the mainstreaming of anti-Semitism and Israel-bashing that is dangerously on the rise in the world and in America.”

Indeed, there is concern that appointing Omar to a committee that deals directly with U.S. policy on Israel may erode bipartisan support for the Jewish state. At the same time, her support for the BDS movement comes as emerging evidence links to BDS organization and Palestinian terror groups.

NORPAC national president Ben Chouake told JNS that the appointment of someone who is pro-BDS could pose a serious risk not only to the U.S.-Israel relationship, but to the safety of Israel.

“Probably the worst assignment for someone with a pro-BDS agenda against Israel, America’s most steadfast ally in the Middle East,” he said.

Similarly, the Orthodox Union feels that her appointment, coming amid growing anti-Semitism in the United States, is also offensive.

The Orthodox Union “was deeply offended by Rep. Omar’s past comments, particularly her 2012 assertion that ‘Israel has hypnotized the world, may Allah awaken the people and help them see the evil doings of Israel,’” OU executive director for public policy Nathan Diament told JNS. “Rep. Omar seemed to double down on this statement when she told CNN last week, ‘I don’t know how my comments would be offensive to Jewish Americans.’ ”

“In light of these offensive statements, the OU was alarmed that Rep. Omar was appointed last week to serve on the House Foreign Affairs Committee,” he added. “We expressed concern about this privately to Speaker Nancy Pelosi’s office and other key congressional leaders.”

On Tuesday, Omar appeared to regret her “hypnotized” tweet: “It’s now apparent to me that I spent lots of energy putting my 2012 tweet in context and little energy in disavowing the anti-Semitic trope I unknowingly used, which is unfortunate and offensive.”

Diament responded to Omar, expressing hope that her realization “is the beginning of a process of engagement and dialogue that will lead to greater understanding.”

Roz Rothstein, co-founder and CEO of StandWithUs, said it was “distressing” regarding her appointment, but she remains confident in the other pro-Israel lawmakers on the committee.

“It is distressing that someone who has previously used anti-Semitic rhetoric was offered this prestigious seat,” she told JNS. “That said, we are encouraged by the overall makeup of the committee, which looks to have a strong bipartisan majority in support of the U.S.-Israel relationship.”

“The Jewish Democratic Council of America has clearly and repeatedly stated its concerns with the views of Representative Ilhan Omar as it relates to Israel,” the organization told JNS. “We have also expressed strong support for bipartisanship when it comes to Israel, and we are confident that bipartisan support of the U.S.-Israel relationship will continue in the 116th Congress under Democratic leadership.”

“In this regard, we welcome the recent appointment of pro-Israel stalwarts Rep. Eliot Engel, Rep. Nita Lowey and Rep. Ted Deutch as the chairs of the relevant committees and subcommittees in the House,” they added.

Engel, from New York, is the chairman of the committee.

Attacks on Omar are ‘bigoted and deeply wrong’

However, J Street, which says it opposes the BDS movement, says the attacks on Omar are unfair, especially considering that she is one of the first Muslim women to be elected to congress.

“At a time when the global population of displaced people is near historic highs and the Trump administration has turned its back on the problem, it’s a positive development that Rep. Ilhan Omar, who herself emigrated to this country as a refugee, will have a seat on the House Foreign Affairs Committee,” its president and founder, Jeremy Ben-Ami, told JNS. “While it’s fair to disagree with and criticize her views on the Israeli-Palestinian conflict, the BDS movement or any other issue, smearing Rep. Omar as an anti-Semite—or suggesting that she is somehow not fit to serve on an important committee like Foreign Affairs—is bigoted and deeply wrong.”

On the other side of the debate, Republican Jewish Coalition spokesperson Neil Strauss previously told JNS, “Democratic leadership just chose to put an anti-Semite on the all-important committee, rather than take a stand against her abhorrent views. It is despicable that Democrats are so afraid to upset their far-left base that they no longer are willing to oppose anti-Semitism.”