Is Julian Edelman the best Jewish football player ever? 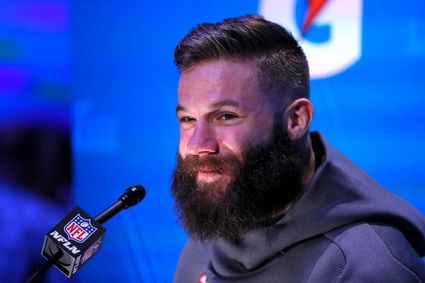 Julian Edelman talks to the media at State Farm Arena in Atlanta, the site of Super Bowl LIII, Jan. 28, 2019. This was his fifth Super Bowl appearance with the Patriots.

"Is Julian Edelman not a Hall of Famer?" Esiason, a former NFL quarterback, asked on a Boston radio show last week. "The guy is clutch in the biggest of games. I don't know what else to tell you. He is, in my eyes, truly the definition of a Hall of Famer: Make the play when the play needs to be made in the biggest games to win the game."

Edelman, one of only a few Jewish players in the league, is certainly the most successful, through his role as star quarterback Tom Brady's favorite target. The Brady-to-Edelman connection has been a major part of the Patriots' dominance in recent years, and the pair have won two Super Bowls together.

Edelman, 32, also is the most outwardly Jewish NFL player, embracing that side of his identity over time. He has a Jewish father but was not raised in the religion, and through the Patriots front office often would defer on questions about his religion.

His is the quintessential surprise story: Undersized at 5-10 and less than 200 pounds, without blazing speed and coming from Kent State-not exactly Alabama-Edelman was picked toward the end of the last round of the 2009 draft. He didn't establish himself as a standout until the 2013 season. Coincidentally or not, it was during his breakout year that Edelman identified as Jewish in an interview with the NFL Network.

Since then, he has shown his Jewish pride on a number of occasions. In a 2014 game, for instance, he wore a pin featuring the Israeli flag. He has tweeted about Jewish holidays. He even went on a Birthright-style trip to Israel, and has written a children's book that references modern-day Zionism founder Theodor Herzl. After the Pittsburgh synagogue shooting in the fall that killed 11, he wore special cleats with Hebrew on them to honor the victims.

As Esiason noted, Edelman has become renowned in large part because of his clutch performances in the playoffs. He has made a series of memorable catches, including one in the 2017 Super Bowl that ranks among the wildest in championship games. Edelman also has the second most postseason receptions of all time.

But getting into the Hall of Fame in any sport isn't just about playoff performance-regular season statistics are an even bigger part of the equation. While Edelman has three seasons of over 90 receptions and two seasons of more than 1,000 receiving yards-more than respectable stats-he just doesn't have the numbers to make it to the Hall (regardless of how Boston-area sports writers have been spinning the story).

Still, could Edelman be the best Jewish professional football player ever? Jews certainly don't have a long or illustrious football lineage.

On paper, it looks like Sid Luckman, a Chicago Bears quarterback born to German Jewish immigrants in Brooklyn, owns that distinction. Luckman, who played for the Bears from 1939 to 1950, boasts an array of impressive stats: He led the Monsters of the Midway to four championships, was the league's Most Valuable Player in 1943, led the league in passing yards and touchdowns in three seasons, and holds the record for most touchdown passes in a single game with 7.

In 2016, the American Jewish Historical Society released a list of who it deemed to be the 10 best Jewish football players of all time. Luckman placed first, while Edelman was fourth behind two other Hall of Famers-offensive lineman Ron Mix and quarterback Benny Friedman.

Of course, Luckman played in a much different era. For now, Edelman remains the only modern Jewish player you can count on to appear in a Super Bowl-just about every year.