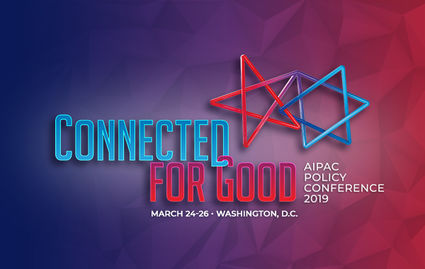 The AIPAC Policy Conference is the largest gathering of America’s pro-Israel community, and will be held this year March 24-26 at the Walter E. Washington Convention Center in Washington, D.C.

Through demonstrations of groundbreaking Israeli innovations, keynote speeches by American and Israeli leaders, inspiring moments on stage and intimate educational sessions, Policy conference delegates experience the full scale of pro-Israe activism in three days. The conference culminates with the delegates’ opportunity to lobby their members of Congress in support of legislation that enhances the relationship between the Unites States and Israel.

“This is the biggest and best pro-Israel event this year,” said Michael Brehne, chairman of the Orlando Executive Council. “Attendees have the opportunity to hear from legislators from both parties about the bipartisan legislation they support. Learn about the threats facing Israel and how they are being addressed and interact socially with others in the pro-Israel community.”

The Convention Center is located between 7th and 9th Streets and N Street and New York Avenue. Phone: 202-249-3000. Register at https://sforce.co/2DTkvcl

Michael Brehne, who took over the position as chairman of the Orlando Executive Council from Marc and Laurie Smith, will hold a pre-policy meeting on March 7 at the Roth Family JCC, at 7 p.m. This meeting is for those who will be attending the conference and plan to lobby.

Brehne will discuss effective ways to discuss issues with members of Congress.

Brehne has lived in Altamonte Springs for over 20 years, and his two children attended the Hebrew Day School. He joined AIPAC several years ago and serves in the congressional club and on the national council where he lobbies in Washington, D.C., three times a year.