Revisiting the Catskills from the staffs' perspective 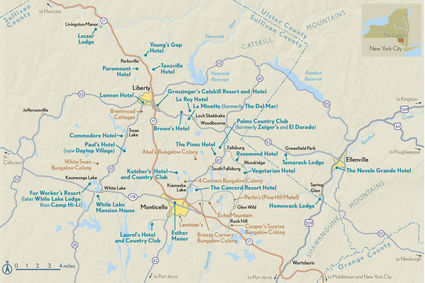 Map of Hotels and Bungalow colonies in The Borscht Belt. Hotel Brickman was located in Fallsburg on Route 42, almost in the center of the map.

In the classic movie "Dirty Dancing," Jack Weston's character Max Kellerman, the owner of the fictional Catskill resort, laments the changes down the road. "[I]t all seems to be ending. You think kids want to come with their parents and take fox-trot lessons? Trips to Europe, that's what the kids want.... It feels like it's all slipping away."

The heyday of the Catskills have ended, but the memories of those resorts remain with those who shared those summers as staff and guests. "This was our Camelot, a place that has vanished but still has a place in the hearts and minds by the thousands whose life were shaped by this shared experienced," said Patty Beardley Roker, a former staff member at the Concord. She and others have many a story to share of their time in the Catskills, often called the Borscht Belt. Borscht, a soup associated with immigrants from Eastern Europe, was a colloquialism for Jewish. Famous hotels of the area included The Concord, Grossinger's, and Kutshers. But there were many smaller resorts and cottages too.

The popularity of the Catskills starts at the beginning of the 20th century. Like many New York City dwellers before the advent of air conditioning, Jews looked for places that would provide a respite from the summer heat. Because of anti-Semitism, particularly in the 1940s, '50s, and '60s, such choices were few. Sullivan, Ulster, and nearby counties offered working class Jewish New Yorkers, mostly Ashkenazi Jewish immigrants, cheap land on which to build farms, bungalows, and hotels.

One such family was the Brickmans. Soon after emigrating from Russia in 1908, Abraham and Molly Brickman realized that New York City, with its tenements, crowded streets, and poor air, was not for them. As Abraham had worked on the farms for the czars, they purchased farmland in South Fallsburg. Soon friends and relatives were coming up to the Brickman to escape the city's summers, and the farm took on boarders. The Brickman's daughter Anna and her husband Joseph Posner and their sons eventually took over the ownership.

Hotel Brickman had 300 rooms that accommodated over 600 adults and children. Along with adult activities, the hotel had a nursery, a day camp for children, and a teen program.

In 1965, 15-year old Patti Posner Daboosh began working in the resort's office. When she was 26, she took over running the kitchen, supervising at times over 200 staff members. Patti recalls fondly the diversity of the staff, which included college students and seasonal workers from the Southern states and from Central and South America.

One evening, Patti walked into the kitchen and realized that one of the kitchen staff was feeding a homeless man. When Patti told the employee that he had to leave, he responded, "When he is finishing eating, I will ask him to leave." Patti said that that encounter taught her humility. "The compassion this man had for this poor person taught me how to be a better person."

In 1986, Patti's father, Benjamin, was 72, and Hotel Brickman like many other Catskill resorts, was dwindling in popularity. The SYDA Foundation, a not-for-profit tied to promoting Sidda Yoga ideas, purchased the resort and converted it into an ashram. Benjamin had no regrets. "We will make new traditions," he told his family. Patti reports her father spent the next 20 years telling stories of his life in the Catskills. Patti eventually went back to college to obtain a degree in sociology, a path connected to the lessons she had learned from working with the diverse Brickman community. She now lives in Weaverville, North Carolina.

Mark Silverman, who now lives in Connecticut, also had deep roots in the Catskills. His parents, Ben and Elsie Silverman, opened up a bungalow colony in Glen Wild in 1947 with Joe Kartin, Ben's partner, in their Flatbush butcher shop. What started as two bungalows in 1947 expanded to 16. Ben and his partner would switch off summers, with one commuting back and forth to Flatbush while the other partner ran the resort and a seasonal meat market.

The bungalows were simple, with a kitchen/living room/dinette, one bedroom, and a screened porch. Entertainment was also low-key-bingo or a movie in the community room, which was called The Casino in the Catskills. Most of the renters came for the entire summer, with the men in the family often commuting on weekends.

Mark, like Patti, started helping his parents manage the resort as a teenager, keeping up the pool, mowing the lawn, and maintaining the bungalows. Even after college, a stint in Vietnam, and his marriage to Diane Weissman, Mark continued to visit during the summers until his parents sold the resort in the 1990s.

"Spending my summers in the country gave me a great appreciation for the outdoors, farms and woodlands in the area," said Mark. "I always knew that I couldn't spend my life in an office, and this led to my career in agriculture and environmental science."

Mina and Max Berjansky owned a bungalow colony in Monticello. In 1950, Susan Shapot Greenbaum, her parents, and her sister moved from the Bronx to join her grandparents. During the off-season, everyone shared the only heated home with one small bathroom. In the summer, Mina and Max moved into the unfinished attic above the small grocery store, and the Shapots crowded into one bedroom and shared the bathroom with tenants. Max maintained the colony while Mina ran the grocery store, the only source of food during the week. Some of the guests shared a kokh-aleyn, Yiddish for self-catered bungalows, which was a large dormitory-styled house in which many families had a bedroom, a shared bathroom down the hall and one large shared kitchen in which each family had its own stove, refrigerator and table. Other families had their own or one side of a two-family bungalow, complete with their own bedroom, kitchen and bathroom. Guests usually came up July 4th weekend and stayed through Labor Day. As in other Catskill resorts, the men frequently commuted back and forth to the city while the women and children remained all summer.

Susan said that her parents provided the low-key entertainment, including folk and square dancing, games, and masquerade parties for both the adults and the children. Every summer there was a "mock marriage" in which the tallest, biggest man was dressed as the bride and the smallest woman was dressed as the groom, with the entire wedding party following the "upside down" comedy act.

When New York State built the Route 17 expressway through the middle of their colony, the family moved into a house in Monticello. Later, Susan tried working as a waitress at the Concord, one the Catskills largest resorts, but lasted only one week. "The regular staff were career people," she said, "and they resented the college kids taking their tables and tips. I got pushed around often." She also spent one summer working as a waitress at Kaplan's Delicatessen, the most popular eating spot during the summer months.

"Monticello was a great place to grow up-a quiet small town from September through June." said Susan. "It was a busy, bustling place in July and August, with lots to do between the hotels, bungalow colonies and crowds of people hanging out on Broadway. And it was always safe."

Peter Vollweiler, who winters in Sarasota and summers in Upstate New York, saw the Northern Catskills through the eyes of his parents and relatives. The Breezy Hotel in Fleischmanns, Delaware County, one of the great hotels, drew many German Jewish Holocaust survivors, including Peter's grandparents. Guests and older staff members generally didn't talk about their war experiences but seeing the tattooed numbers on many arms showed their former plight.

Peter worked at The Mathes resort during his summer school breaks from 1958 to 1963. He had a variety of occupations: pool boy, grounds "picker upper," baby sitter, children's dining room busboy, bellhop and chauffeur. The working hours were long with low pay, but the staff was treated very well. The fine European meals and desserts made it all worthwhile. Working with so many other young people, many themselves also children and grandchildren of survivors, was important to Peter.

Marty Calderon, an Upstate New Yorker who retired to the Tampa area, worked two summers as a busboy and a waiter at the Pine Lodge near Monticello. Like Brickmans, the Pine Lodge was a mini-version of the larger resorts, "a small cruise ship on the ground."

Marty remembered the long hours, which often extended from 6 a.m. to 11 p.m., seven days a week. For his efforts, he made $75 a week, money he brought home to his parents in New York City.

Marty enjoyed the camaraderie with fellow staff members, and the food was plentiful and delicious. For two years, he worked at the resort during Passover. "Before that experience, everything I had eaten during Pesach was dry and tasteless," said Marty. "At Pine Hills, it was like a Viennese table at a wedding. I can still taste that sponge cake!

Joel Thaw, who lives in the Orlando area, spent every summer from birth to age 18 in the bungalow colonies. What he remembered the most was the freedom he had as a child. "We left after breakfast and didn't return until before dinner. Everybody knew everybody, and the parents watched out for each other's children." He also worked a concession stand the summer of Woodstock, which took place in nearby Bethel. Joel remembers putting a 16-year-old in charge of the stand while he and a friend drove to the music festival in time to see Jefferson Airplane before driving back. 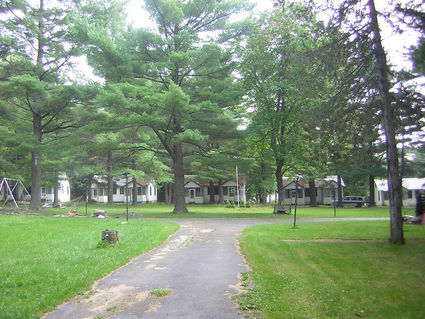 One of the many bungalow colonies in the Catskills.

Patty Roker and Patti Daboosh will attend a reunion of Catskill staff members on May 4, 2019, at the Villa Roma Resort in Callicoon, New York, a Catskill hotel dating from 1944. Reunion chair Robin Kauffman, who vacationed with her parents and later worked at the Homowack Hotel, stated that already close to 100 people have signed up. "We are going to make history," said Robin. "This will probably be the first time that many former Catskill bungalow and hotel staff will reunite together under one roof."

She reports that among those committed to attend are former "tummler extraordinaire" Larry Strickler and MC Mel Simons, as well as some of the musicians who accompanied the greats. In addition to the reunion's evening event, programs are set for the entire weekend. (Strickler will present an interactive program on Saturday afternoon.)