A tribute to Rabbi Rubinger 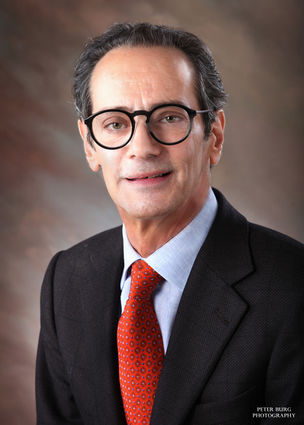 Anyone who has attended a service led by Rabbi Rubinger may very well have come away with the impression that he was practically born in a synagogue. And, in a sense, he was.

"My first home was in a synagogue," Rabbi Rubinger recalled recently. The son of a Conservative rabbi, Rabbi Rubinger was born in Somerville, N.J., in 1952, when his family's home was in the living quarters above the congregation where his father, Rabbi Naphtali Rubinger, had a pulpit.

Later the family moved to Albany, N.Y., where his father became the rabbi of a Conservative congregation-coincidentally, named Congregation Ohav Shalom. With no Jewish schools to serve Albany's then-small Jewish community, Aaron Rubinger attended public schools and was an athletic youth, competing in running and high jumping and frequently swimming at the Albany JCC. A gifted student, his favorite subjects were social studies and literature, and as a teen envisioning his future career path, he saw himself as an academic.

Although his love of Judaism and Israel was deeply ingrained, "the funny thing is that the last thing I ever wanted to do was become a rabbi," he laughed.

"But my father said, 'You like Judaic studies-just apply!' So I did," Rabbi Rubinger recalled. He was one of only two students from Brandeis who were accepted at JTS out of the 20 who applied-and neither of them enrolled. "The other guy went to law school and I went to graduate school," he said.

He attended UCLA, which had offered him the prestigious Chancellor's Intern Fellowship Award, and graduated in 1976 with an M.A. in ancient history. Rabbi Rubinger then transferred to UC Berkeley, enjoying teaching while earning doctoral credits. But, he said, "I was really not happy in the academic world." He loved teaching, but he realized he wanted to do much more with his life and have an even greater impact on others. He wanted, after all, in the end, to become a rabbi.

So, he asked for and was granted readmittance to JTS, where he excelled, winning the Abraham Berliner Prize in History, the Rabbi Joseph and Francis Miller Prize in Bible and the Lamport Homiletics Prize. His first daughter, Ariella, was born in his last year of rabbinical school, while he held a student pulpit in a small Maywood, N.J., synagogue and lived in a house next door.

After he was ordained in 1982, Rabbi Rubinger was the first student in his class to be hired-and at his first-choice congregation, Temple Beth Abraham in Canton, Mass., which is about 20 minutes outside Boston. His daughters Becky and Adina were born during his eight years of service there. During that time, Rabbi Rubinger was a rabbinic leader in the Refusnik movement that was occurring in the USSR, leading his congregation to "adopt" more than 20 Refusniks who were seeking to emigrate. In that effort, he traveled to the USSR three times to meet with Soviet dissidents and Refuseniks.

"Some of those people had been in Siberia," said Rabbi Rubinger. "They were so brave, and so inspiring." He is still in touch with some of them and sees them when he goes to Israel. In the U.S. at the time, he was an activist advocating for their freedom. "It was one of the most fulfilling things I've done in my life," he said.

In 1990, Rabbi Rubinger felt it was time to take on a new challenge. He very seriously considered making aliyah to Israel with his family, but he also added his name to the Rabbinical Assembly's list of rabbis who were available for consideration by Conservative congregations in the U.S. As fate would have it, he interviewed for and was offered the position of rabbi at Orlando's Congregation Ohev Shalom as Rabbi Rudolf Adler was transitioning to rabbi emeritus.

At the time, COS was a smaller congregation and was not ritually egalitarian, and Rabbi Rubinger made clear at the outset that he would work to change that. The process of change was not always smooth, but women at COS have now long had the same ritual status as men for aliyot, Torah reading, making a minyan, and other elements of Jewish observance.

After the USSR dissolved, soon after Rabbi Rubinger arrived at COS, he continued to focus on the plight of Russian Jews. "Those who were coming to the States-they needed help, they needed support, they needed everything," he recalled. He worked with COS congregants, whom he credits with giving so much of themselves, to help some families resettle in Orlando.

Rabbi Rubinger quickly became known for his empathetic pastoral care and his eloquent and stirring sermons. In 2007, Ohev Shalom published an anthology of his sermons, "Insights Along the Way," celebrating Rabbi Rubinger's 25th year in the rabbinate. That anthology won a United Synagogue award.

Among the many innovations in Jewish learning and observance he championed at COS and in the Orlando community are the annual COS Discover Judaism class (through which he has overseen an estimated 300+ conversions over the years), the creation of the only Conservative mikvah in Florida at the time (added to the Goddard building and built into the current building), the community Hebrew high school known as Beit Hamidrash, initiation of the Orlando Community Minyan, and Ohev Shalom's Adult Yeshiva. He has served as president of the Greater Orlando Board of Rabbis.

As COS began to grow under his leadership, Rabbi Rubinger advocated to hire Cantor Allan Robuck as the congregation's cantor-the first full-time cantor at Ohev since 1952. Within a few years Amy Geboff was hired as education director and then Rabbi David Kay as COS's first assistant rabbi. With this excellent team in place, said Rabbi Rubinger, "people started coming to services, and we grew and grew and grew."

In fact, as Rabbi Rubinger noted, "we grew so much, we had to leave that building." Of course, he can't help but be proud of the beautiful synagogue the congregation built under his leadership in 2011, but it's the vibrancy of the congregation, the enthusiastic participation and attendance of the membership that is most meaningful to him: "When I tell colleagues we easily could have 150 people on a Shabbos morning without a bar or bat mitzvah, they say, 'What!' They're stunned. That's not the norm. So it's not just the physical building, it's what goes on inside of it."

He said that for him, the most challenging part of being a rabbi was trying to juggle a wide range of responsibilities. "I always felt like there wasn't enough time in the week for everything and something was going to drop. And I hated it when that ball dropped because somebody ended up maybe being hurt or disappointed."

However, he said, it means a lot when people tell him, sometimes years later, that a talk he gave or a class he taught made a big difference in their lives: "I became a rabbi, in part, because I wanted to have an impact on people's lives, so when you find out that you did, that's certainly the most rewarding." Also rewarding is when he sees that a congregant has increased his or her religious observance, perhaps by coming more often to services or by making the home kosher.

As when he was a graduate student all those years ago, he still enjoys teaching. "I love introducing people to the Jewish heritage, whether it's parts of the Bible or whether it's Jewish literature," he said. He's especially enjoyed teaching classes at Ohev since he became rabbi emeritus because, he laughed, "I have nothing else to stress over."

Shabbat services have also taken on a new sweetness for him, as he sits in his now-customary pew near the front of the COS sanctuary. "I enjoy praying much more when I'm not on the Bima," he said. "It's very hard to focus and concentrate on your prayers when you're conducting the service"-continually thinking ahead to what comes next in order to keep the service moving.

In his semi-retirement, Rabbi Rubinger plans to continue focusing on Israel advocacy as well as the serious problem of anti-Semitism and anti-Zionism facing Jews in Europe, which he studied during his sabbatical travels to seven European countries in 2011 and 2012. Due to his past research and writings on the subject, the World Zionist Organization invited him to its December 2018 conference in London on countering anti-Semitism in Europe-one of only a few Americans and, he believes, the only American rabbi at the conference. In late May of this year, he'll travel to Israel for a mission arranged by Honest Reporting, an organization that works to defend Israel from media bias.

Rabbi Rubinger will be honored with a two-part tribute to his remarkable tenure at COS. At Shabbat services on Saturday, March 9th, he'll give a sermon, "Things I've Always Wanted to Say," and a special kiddush luncheon will be served. And at 5 p.m. on Sunday, March 10th, the tribute to Rabbi Rubinger will continue at the annual COS Gala, with cocktail hour and silent auction, gala dinner, and entertainment by the nationally acclaimed powerhouse duo of Branden and James. Members of the community are warmly welcomed; further information can be found at OhevShalom.org, or call 407-298-4650.