A Mexican Jewish babka is taking over Chicago 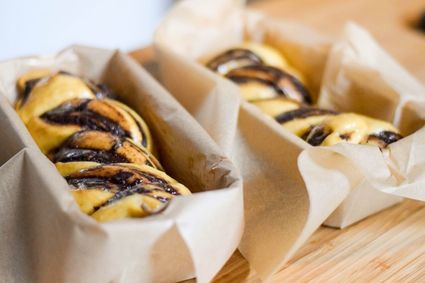 Founded by two Mexico City natives, Masa Madre offers a limited selection of made-to-order treats, many of which draw on co-founder Tamar Fasja Unikel’s Jewish heritage. Among Masa Madre’s offerings are several flavors of babka, challahs and a rotating selection of seasonal treats that change with the Mexican, American and Jewish calendars—from Pan de Muerto for the Mexican Day of the Dead to Thanksgiving pecan pies to rugelach and Hanukkah sufganiyot.

“Mexicans, Americans, and Jewish people are all very excited because there is something that they can relate to, but still try something new,” Unikel says.

Indeed, although the business is only a few months old, Masa Madre has attracted lots of attention and loyal customers with its unique flavor combinations and personal, artisanal approach to baking.

“We do everything [to] order,” Unikel says. “We make every order by hand. It’s a different experience. You get a special treat that was packaged just for you.”

Not only do Unikel and her partner, Elena Vázquez Felgueres, make everything by hand, they put their hearts and their heritage into each of their unique creations. Both women have day jobs—Felgueres teaches yoga and Unikel teaches kids’ cooking classes as well as maintains a food blog called Ssugarpill — but they get up early and stay up late to bake for their customers.

The longtime friends met at university in Mexico City when both were studying fashion design, but Elena soon switched gears to attend culinary school and then cooked in restaurants in Spain and Mexico. Unikel worked in fashion for a time but eventually moved to Chicago where her husband was pursuing a doctorate in biblical studies.

When Elena ended up in Chicago a few years later, the two friends were determined to find a way to work together. They launched a business selling sourdough bread and babka, which Unikel had learned to bake when living in Israel. The sourdough soon fell by the wayside and the friends honed in on a highly curated menu of pastries anchored by the babka. Why babka?

“My grandmother is a baker and she is Ashkenazi, and I really felt like it was part of my heritage,” Unikel says. Babka “is something that people here didn’t really have. I had tried it in New York and Boston and I loved it and I couldn’t really find it in Chicago.”

Not only is Masa Madre’s rich, not-too-sweet babka arguably the best in Chicago, like all of Masa Madre’s other offerings it reflects Unikel and Felgueres’s Mexican roots. Unikel grew up in Mexico City’s thriving Jewish community with both Ashkenazi and Sephardic ancestry.

“My grandparents came from Syria on my dad’s side and Poland on my mom’s side,” Unikel says. “They’ve been in Mexico for over a hundred years, so of course there’s a lot of mix in the food culture.”

From the beginning, Unikel and Felgueres knew they wanted Masa Madre’s treats to mix Mexican and Jewish cuisine.

“We’re both Mexican; we’re not both Jewish,” Unikel says. “Elena has shown me the recipes that she grew up with and I [showed her] mine. When I tell her about a holiday or a Jewish thing I want to do, she is quick to understand it.”

Felgueres’ professional training and extensive work experience in the pastry field has helped as well.

“She has a lot more experience in baking than I do,” Unikel says about her partner. “And she brings a lot of the Mexican flavors.”

Mixing Mexican flavors into traditional Jewish dishes, at least on the savory side, has been happening in Mexico for centuries. But not in dessert.

“This isn’t something that is happening in Mexico that much,” Unikel notes. Among Masa Madre’s diverse clientele, Jewish Latinos, in particular, “have been very excited to see the mix of the two [cuisines].” Even Unikel was surprised to learn how many Jews from Latin America, or with Latin American roots, are in Chicago.

The bakers also were influenced by their shared Chicago neighborhood, Pilsen. Unikel calls it “amazing.”

“It’s mostly Mexican. The interesting thing is that it was started as a Polish neighborhood,” Unikel says. “So I feel like what we are doing is a mix of those two: an Eastern European and a Mexican thing.”

In return, the neighborhood has embraced Masa Madre.

“So far, [the residents of Pilsen] have been very receptive,” Unikel says gratefully.

Unikel is keeping mum on what unique treats Masa Madre will offer for spring holidays.

“We think about [holiday items] about a week in advance,” Unikel says with a laugh. “We are going one step at a time.”

There is one secret that Unikel is willing to share: She and her husband are expecting their first child in June. But she plans to keep baking.

“I don’t know what is going to be happening with the business then,” Unikel says. “But I am happy I will be able to keep working from home.”

Chicago-area babka lovers are counting on it.

Emily Paster writes the widely admired blog West of the Loop, which is primarily about food but with forays into parenting and family life. She is the co-founder of the Chicago Food Swap and is a national leader in the growing food swap movement (community get-togethers where handmade foods are bartered and exchanged). She is the author of the book “Food Swap” [Storey 2016].” She has appeared numerous times on food and cooking segments for the major TV network affiliates in Chicago.