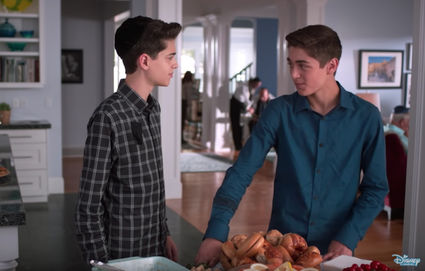 If you and your tweens still aren't watching the Disney Channel show "Andi Mack," you must start ASAP. It deals with so many kinds of identities, including Jewish, in a way not usually seen on TV aimed at the pre-teen set.

"Andi Mack" - the first Disney Channel show to focus on an Asian-American family-has broken new ground for the channel time and again. The premise is that Andi (played by Peyton Elizabeth Lee) discovers that Bex (Lilian Bowden), the woman she thought was her sister, is really her mother, and the people she thought were her parents are her grandparents.

Though the show doesn't talk about premarital sex outright, the fact that it has a character who was a teen mom already gave this series game-changer status.

In its three seasons, "Andi Mack" has dealt with everything from sexuality to gun safety to anxiety. A recent episode, "One in a Minyan" (even the episode titles are smart!), achieved another major milestone, and it happened at a shiva, no less.

Cyrus Goodman (Joshua Rush) is the first openly gay main character in a Disney Channel series (yes, another first!). The series had previously-and sensitively-handled his coming out to his best friends, first Buffy (Sofia Wylie), then Andi (at his bar mitzvah-sensing a theme here?).

In both instances, Cyrus spoke about having a crush on their friend Jonah Beck (Asher Angel), but he didn't actually use the word "gay." At his grandmother's shiva, however, he regretted never telling her, so he decided it was time to come out to Jonah. At the buffet table, he was explaining all the food items-kugel, lox and so on-then simply said, "That's gefilte fish. Skip that. And I'm gay."

That's the first time a character on a Disney Channel ever said the words.