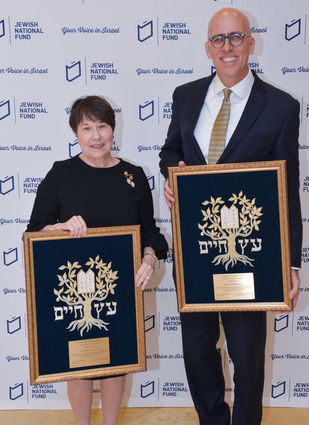 If you thought that the Jewish National Fund only planted trees, you are way behind the times. JNF was founded in 1901 to buy and develop land for Jewish settlements well before Israel became a nation in 1948. By 2007 it owned 13 percent of the total land in Israel and the nonprofit has planted over 240 million trees.

Now JNF is invested in many other ways to support the land and the people of Israel through water solutions, research and development, education and most recently, becoming a key partner in making Israel more inclusive for adults and children with disabilities.

Every year, the JNF Orlando chapter chooses two community members to receive the Tree of Life Award. This year, Rabbi Aaron Rubinger eloquently introduced honoree Roz Fuchs, who is truly dedicated to the Central Florida Jewish community. Following her acceptance speech, Tree of Life Award Gala co-chairman Joshua Brown began his introduction of honoree Thad Seymour, Jr. by saying that when it comes to giving a speech "Don't ever follow Rabbi Rubinger or Roz Fuchs." The room burst into laughter. Seymour, who is vice president for Partnerships and chief innovation officer at UCF, didn't skip a beat as he took the mic. "I want to thank JNF for giving me the last half hour to talk," he joked.

The keynote speaker at the JNF Tree of Life Award Gala this year was Major General Doron Almog, founder of ALEH-Negev, a rehabilitative center in the Negev that will be home to over 200 adults with disabilities and serve 12,000 children with disabilities-the special needs kids.

In his talk, Almog shared that one important "law" woven into the hearts of IDF soldiers is to never leave anyone behind. He knows this well. While in the IDF, he commanded the first force to land in Entebbe airport to rescue 106 Israeli hostages right out from under the Ugandan armed forces' noses. "I was the first soldier to land, and the last to leave," he stated.

Of the 106 hostages held, 102 were rescued alive. Three died in the mission and one died later in the hospital. Only one Israeli commander was killed-Lt. Col. Yonatan Netanyahu. They all returned to Israel.

Almog shared with the gala attendees, which filled Congregation Ohev Shalom's sanctuary, that he lost his brother at age 22 during the Yom Kippur War. Later he learned that his brother had been thrown from his burning tank, yet lived seven days alone by the tank. He had been left behind and when he was found, he was already dead.

This burned in Almog's soul. He learned that not only should you not leave any soldier behind, never leave the weakest behind. He was referring to someone very close to him-his son. In 1984 his child was born with brain damage. At 8 months of age he was diagnosed with autism/retardation (the doctor's words).

"How do you continue when your child won't be successful?" Almog asked. But this child, who has never said Abba or Ema taught Almog about values-love, never to discriminate but to break down the stigma and shame.

"They are blood from our blood. An integral part of our people," Almog said in his soft, strong voice.

Almost as if his son was speaking to him, Almog shared his son's thoughts: "I'm a hostage every single day of my life. You saved 106 from being hostages for one week."

He continued, "They are the mirror of ourselves. So, we are for the disabled and must establish the best standard of living for them. We will never forget our disabled." 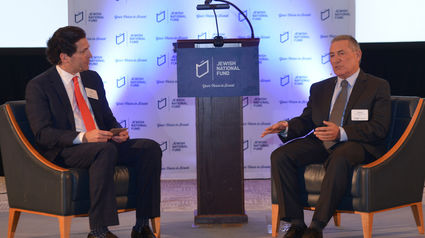 The evening's honorees, Fuchs and Seymour, are people of action, and just like them, Almog's words became actions. In 2003, Almog founded ALEH-Negev. He does not take a paycheck. Half of the money for the facility comes from the government, the other half from donations, of which JNF has contributed $23 million. In addition to a full staff of professionals, there are more than 200 volunteers at ALEH-Negev who help care for more than 750 children with disabilities and medical conditions. They receive medical, educational and rehabilitative care in ALEH's four residential facilities, located on 25 acres in southern Israel. ALEH also provides rehabilitation for soldiers and more than 45,000 outpatient treatments yearly.

Almog encouraged the audience to send their children and grandchildren to volunteer at Aleh-Negev when they come to Israel. "It will make them better people," he said. "This is not just about raising dollars. It is about creating a better society."