Talking with Hal Linden about JNF, 'The Samuel Project' and life 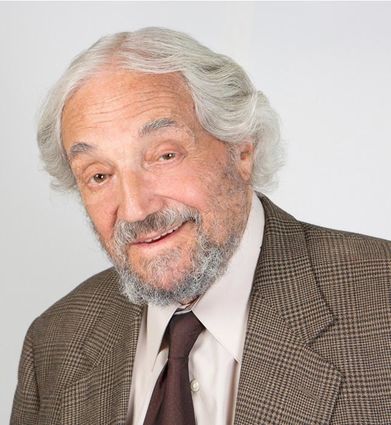 Hal Linden as Samuel in "The Samuel Project."

Actor Hal Linden (of "Barny Miller" fame) has never been to Orlando, but he has been all up and down the east coast of Florida as the national spokesman for the Jewish National Fund, a position he has held since 1997. He came into the world with a father who was a Zionist before World War I. He remembers always putting nickels and dimes into the JNF Blue Box as a kid, but didn't really grasp his father's passion at that time.

He also stars in the film "The Samuel Project," which opens today in Regal theaters in Central Florida. Linden spoke with Heritage about the film and his role as JNF spokesman.

"The Samuel Project" has a three-dimensional storyline. It's the story of a 17-year-old boy who hopes to win a scholarship to an art school by creating an animated video about his grandfather's past surviving the Holocaust. Reluctant at first, the grandfather, Samuel (played by Linden), agrees to tell his story when his grandson, Eli (Ryan Ochoa), proposes to work for free in his dry-cleaning shop.

"It is a common reaction," Linden said of Holocaust survivors not talking about their past. "It's difficult to talk about it. Lives are contextual. The now is determined by the then. We are always effected by 'then,' whether we like it or not."

Linden will tell you that "The Samuel Project" isn't really a Holocaust movie. "It started as a Holocaust film, but we have enough of those and it is not the point of the picture. It really is a relationship movie. Art is the vessel for the family to come together," he said.

A seasoned actor and musician-he won three Emmys for his lead role in the 1970's television hit "Barney Miller," a Tony award for his Broadway performance in "The Rothchilds," and toured with big bands during the 1950s-Linden had the opportunity to work with director Marc Fusco on the script, more than any project he has been with, he said. "We realized the story isn't about Samuel, as it started out. It's the story of Eli. He is the star and central character to the project." From Linden's perspective, "The Samuel Project" is about Eli creating an animated short story, which just so happens to be about his grandfather surviving the Holocaust.

Linden's parents were immigrants from Europe in the early 1900s. His father came from Lithuania as a teen, his mother's family came from Belarus when she was an infant. Linden grew up in the Bronx where he had many Italian and Irish friends. At that time, he said he had no need for another country. Until after WWII.

"What turned the corner for me was the way the British acted after the war. They closed off access to Palestine and didn't let the displaced persons into Israel. They shipped them to Cyprus."

In the film Samuel describes himself as a "DP"-displaced person. He had been a child who survived the Holocaust through the loving kindness of a young woman who found him, but he lost his entire family. He explains to Eli what a DP is.

As the storyline in the film progresses, viewers see how disconnected this three generation (grandfather, father and son) family is and how through Eli's art project the family comes together, as each sees what's important in life.

As the film progressed, I kept hoping to see a glimpse of this art project, how Eli interpreted through animation his grandfather's story. It isn't until the end that we see the completed project.

I mentioned this to Linden who told me that he didn't see the "completed art project" either until he saw it in the completed movie.

"When you are acting, you only see the parts that you are working on," he explained. So, he saw it as I saw it, and he was impressed.

"You have to remember though," he shared, "in the movie, this is the art project of a 17-year-old, not a professional artist. The director showed great restraint to remember that aspect and kept it in the perspective of the young boy. "

Linden is right, the final animated project is a bit juvenile. However "The Samuel Project" video still captured my heart.

Back to Linden's role with JNF. He leads tours for those 50+ every year to Israel (not as much climbing, he said)-the next one is in November. As for his passion for Israel, he asked his wife, Francis (who is not Jewish), what she wanted for their 50th wedding anniversary. "She said, 'I want our grandchildren to see your passion,'" he said.

Through JNF, Linden's family of 19-their kids, their grandkids and one mother-in-law-traveled throughout Israel for 10 days.

"We'd spend one day doing fun stuff, then a day doing something serious like reading history in Yad Vashem."

He continued, "It's interesting, my 11-year-old grandson read the 'Who is a Jew' in Yad Vashem. He read that Jews have brown eyes. He has brown eyes and he was taken by that. He came home and said he wanted to be bar mitzvahed, and since then two others have been bar and bat mitzvahed."

Also while in Israel, his family dedicated a reservoir to his parents through JNF.

Oh! One more thing. Hal Linden will be in Central Florida at The Villages on March 12, starring with Barbara Eden in the play "Love Letters," the late A.R. Gurney's most famous Broadway production. Show times are 5 p.m. and 8 p.m. at The Sharon Performing Arts Center, 1051 Main Street, The Villages. Tickets for the show or the Meet and Greet can be purchased at https://thesharon.com/events.

For information about the Linden trips to Israel, visit http://www.jnf.org.