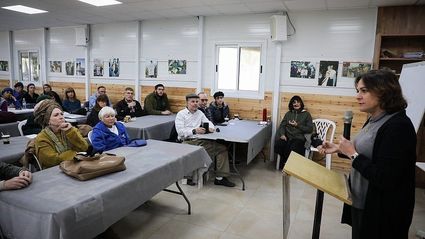 (JNS)-When anti-Israel organization "Combatants for Peace" announced recently that it would protest Israel's alleged annexation of Area C-the Israeli-controlled part of Judea and Samaria-the Sovereignty Movement, an offshoot of Women in Green and headed by Yehudit Katsover and Nadia Matar, immediately responded to the provocation.

They mobilized a large group of people to attend a lecture by veteran journalist and Knesset candidate Caroline Glick, of the New Right Party, at the Oz veGaon nature reserve in Judea, outside of Gush Etzion, to "prevent the continuing Arab takeover of Area C."

Katsover and Matar told JNS, "If we had sovereignty in Judea and Samaria, these types of incidents would not happen."

Glick said it was shocking that, "after four-and-a-half years of Zionist education and tourism work done at Oz veGaon," there are still groups working to expel Jews from their own land.

Shortly after the announcement by the Sovereignty Movement, the Israel Defense Forces declared the entire area a closed military zone in order to prevent the anti-Israel activists from entering.

Oz veGaon is a nature preserve in the heart of Judea, established in the summer of 2014 by Women in Green in reaction to the murder by Arab terrorists of three teenage boys: Gilad Shaer, 16; Eyal Yifrach, 19; and Naftali Fraenkel, 16.

Combatants for Peace falsely claimed that a new access road was opened to Oz VeGaon on the lands of the nearby Palestinian village of Beit Ummar. Organizers called on activists to "plant trees on the access road together with the village residents, with the objective of perpetuating the ownership of the village residents over the lands and the right to cultivate them."

The anti-Israel organization called on the activists to express "nonviolent opposition to the daily, creeping annexation of Area C."

In a message sent to followers, the Sovereignty Movement wrote: " 'The new access road to the outpost' as defined by the provocateurs who plan to come on Friday, is not a road, is not new and is not on the land of Beit Omar village. This is an escape route on state lands... that we were forced to open after Arabs ... threw a Molotov cocktail at the preserve... It is this path that has so enraged the Arabs and the Jews of the Combatants for Peace."

Katsover and Matar explained that "the land of Oz veGaon is approximately 300 dunams [about 74 acres]. It is state land zoned for the construction of vacation cottages. The zoning permit was temporarily delayed in order to undergo small changes because of the security fence that was supposed to be placed there."

Katsover and Matar emphasized that when Israel extends its sovereignty over Judea and Samaria, "such things will not happen. It will be clear this is Israeli land."

Oz veGaon has withstood yet another attempt by anti-Israel provocateurs to deny its right to the land on which it is situated.

As Katsover and Matar concluded: "This was a victory."