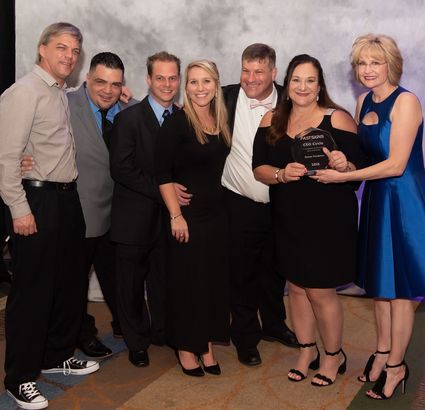 Owned by Renee Friedman-Goldstein, FASTSIGNS of Orlando-Central, now entering its 33rd year as a business, was recently recognized at the 2019 FASTSIGNS International Convention for various achievements. FASTSIGNS of Orlando-Central received the CEO Circle Award for the third consecutive year, which recognizes the top 25 centers with the highest sales volume in the U.S. and Canada between Oct. 1, 2017 and Sept. 30, 2018. They also received a Mentor Recognition Award, which recognizes a seasoned franchisee who serves as a mentor to a new FASTSIGNS franchisee for the first six months of operation.

"We are excited to be recognized as a top performing center in the FASTSIGNS network of over 700 locations in nine countries worldwide," said Renee Friedman, owner at FASTSIGNS of Orlando-Downtown. "This award reflects our entire team's hard work and dedication to helping businesses and organizations solve their visual communications challenges in our community every day."

FASTSIGNS of Orlando-Central was also recognized for their extensive work with four distinct organizations in the Orlando community as part of FASTSIGNS' "Show Us How You Care" philanthropic initiative. Friedman and her team have received this honor for the third year in a row. In 2018, the team at FASTSIGNS of Orlando actively participated in efforts with Friends of Down Syndrome, RAISE, Big Brothers Big Sisters and Curebowl, providing a wide range of products and services to each of the four organizations touched by their philanthropic efforts.

FASTSIGNS of Orlando-Central sponsored the Cinderella Ball for Friends of Down Syndrome, which is the largest fundraising gala of the year. The FASTSIGNS team attended the event, donated signs, provided signage discounts and volunteered their time visiting the campus. The center also stepped in as the first corporate sponsor for RAISE, an organization that provides paid, supported employment at partnering agencies and transition to employment into the community. The team volunteered time and attended multiple events hosted by RAISE, donated signage and provided social media support.

In addition, FASTSIGNS of Orlando-Central became the official marketing and signage partner for Big Brothers Big Sisters and donated signs, volunteered time and provided signage and social media support. And finally, the team became a sponsor for Curebowl, an annual American college football bowl game played in December of each year at Camping World Stadium in downtown Orlando, Florida. This event is named to promote awareness and research of breast cancer, with proceeds going to the Breast Cancer Research Foundation. The FASTSIGNS team attended this event as well as providing signage and social media support.

"The team loves working with these nonprofits; it truly makes a difference working for a bigger cause and giving back to our community," said Friedman. "We especially love when we are able to attend the events as a team and really see it all come together and the impact it makes. There is so much goodwill that comes from giving back to all these wonderful charities that simply can't be measured. "

Friedman has been an early adopter and advocate of the Show Us How You Care arena of FASTSIGNS International, Inc. as she has continually spearheaded efforts since to actively make a difference in her community through her business.

"We thank our customers for their support and look forward to further helping companies of all sizes achieve their goals using comprehensive signs and visual graphics," Friedman said.