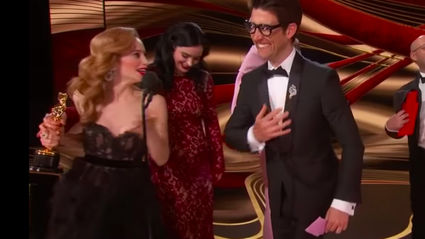 "Skin," a 20-minute movie, focuses on hate crimes and their impact on a skinhead and two young children, one black and one white.

"My grandparents are Holocaust survivors," he said. "The bigotry that they experienced in the Holocaust, we see that everywhere today-in America and in Europe. This film is about education; it's about teaching your kids a better way."

"We dedicate this to our 5-month-old baby, who is sitting at home with my parents watching this," said Nattiv's wife and film producer, Jaime Ray Newman. "We hope that you grow up in a world where these things don't happen because people learn to love and accept each other."

Israelis screenwriter Sharon Maymon also accepted the award, and told Ynet that "it's exciting to realize a childhood dream and send a message about racism, parenthood and education.

"Congratulations to Guy Nattiv on winning Best Live Action Short at tonight's Academy Awards. Dear Guy, all credit for 'SKIN' goes to you, Sharon and Jaime Ray, but the movie is a gift to our children and grandchildren and for the future we wish for them," Rivlin wrote. "Proud to be Israeli! Mazal Tov!"

"This win is another story of the success of Israeli cinema," said Sports and Culture Minister Miri Regev. "Nattiv, the son of Holocaust survivors. Nattiv's win, for a film about hatred and racism, is an important cinematic chapter in the uncompromising struggle against those who choose racism as their way of life. I congratulate Guy and all those who were partners in his film."

Yisrael Beytenu leader Avigdor Lieberman said Nattiv was "waving a red flag with his film in front of the troubling growth of anti-Semitism in the world. It is more food for thought for Jews around the world that only Israel is their real home."

The last Israeli film which won an Oscar was the 1979 "Madame Rosa," which won Best Foreign Language Film for its adaptation of the 1975 novel "The Life Before Us" by Romain Gary.

Nattiv's full-length film, also titled "Skin," is based on an 2012 MSNBC documentary about Bryon Widner, one of the FBI's most wanted white supremacists, who changed his ways after meeting a single mother and her three young daughters. It is expected to be released later this year.