Local teens connect with others at the CTeen International Shabbaton 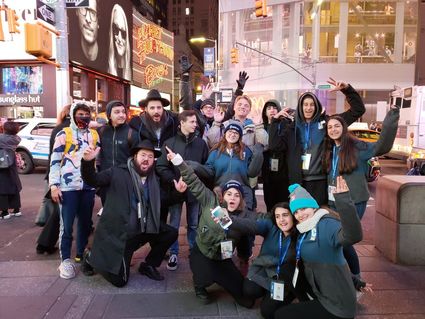 Thousands of teens from around the world celebrated Jewish unity, heritage, and pride at the 11th annual CTeen International Shabbaton. The convention, which drew in over 2600 participants, was the most electrifying and meaningful event to date. From world class guest speakers, to a life changing closing ceremony with a surprise guest appearance by Adam Neumann, founder of WeWork, CTeen left the teens exhilarated and ready to share their Jewish pride with the world.

The inspirational weekend included a traditional Shabbat experience in the heart of Crown Heights, the Hasidic neighborhood of Brooklyn; meaningful hands on workshops and lectures about Judaism; and the ever popular Times Square takeover, featuring world renowned Jewish popstar, Yaakov Shwekey.

The theme of the historic Shabbaton was I-Matter. The aim of the theme was to empower teens to recognize and use their inherent, true value that is not dependent on achievements or status. It is a message that resonated with thousands of teens who have found their voices and personal missions through their involvement in CTeen.

“There are things that every teenager goes through, but that we rarely talk about. Watching my fellow CTeeners on stage was like a breath of fresh air. Hearing their stories reminded me that I am not alone; none of us are,” shared 12-grader Meira Borsody.

“The Times Square concert was amazing!” said Sarah Glasser, who is in ninth grade. “I felt a much deeper connection with my Judaism than I ever have because I was surrounded by so many Jewish teens that were proud of who we are as a nation.”

Fifteen teen speakers shared personal stories of struggle, triumph, and strength in the face of adversity. The stories—ranging from students who fought for Jewish rights at school, dealt with alopecia and subsequent bullying, to teens who lost family members to drug addiction—captivated the crowd, leaving a deep impression on the audience.

Priest turned rabbi, Yaakov Parisi, captivated the teens with his animated story during Shabbat dinner, sharing his inspiration for living a Jewish life.

Professor Binyamin Abrams, who lectures on chemistry at Boston University, left an indelible impression on the teens, resolving questions about Torah and science, and inspiring the teens to seek knowledge while living Jewishly.

“The secret of my life and success is keeping Shabbat,” Adam Neumann shared in a powerful, electrifying surprise appearance. “Disconnecting from the world for 25 hours and connecting to something greater than myself makes me who I am. There has never been a more relevant time in history to celebrate being Jewish. If you come away with one thing today, I hope it’s that you disconnect to connect.”

“Our intrinsic worth is not based on achievements. Every individual can connect to G-d, no matter the circumstances. It is because of this connection that every individual, in any situation, can make a significant difference,” shared Rabbi Mendy Bronstein of Chabad of Altamonte Springs. “That is what CTeen is all about.” Indeed, a brave teenager from the Cteen Las Vegas chapter went up on stage, and shared his inspiring message of finding his self-worth despite constant bullying about his appearance. After his speech, he was surrounded by kids giving him high-fives, hugs, and thanking him for inspiring them to be stronger.

“You may find yourself alone, the only Jew in your public school, you may feel like a minority, but remember: there is no such thing as a small Jew,” shared Rabbi Moshe Kotlarsky, chairman of CTeen. “I hope you take the energy you gained this weekend and carry it into every aspect of your lives back at home.”

With over 500 chapters in 23 countries, CTeen creates a nurturing environment where giving to others encourages self discovery. The network’s mission is to empower tomorrow’s next generation of leaders through Jewish education, and by providing a strong Jewish network across the globe. Teens develop awareness and confidence, while connecting with individuals sharing similar experiences and beliefs, becoming an integral part of a group that focuses on building core values and stresses positive character development. CTeen is open to Jewish teens regardless of affiliation.

For more information on future programming for your teen, please contact your local Chabad.