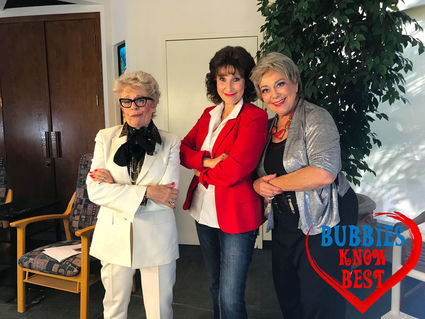 (JNS)-In each episode of "Bubbies Know Best," which premiered Feb. 11 on JLTV, S.J. Mendelson, Linda Rich, and Bunny Gibson interview three potential suitors before picking one to go on a date with their bachelor or bachelorette. The bubbies then watch them-with the help of a live camera-go on a date and afterwards give pointers on what the daters did right and wrong.

The Los Angeles-based grandmothers set up singles of all ages, both Jewish and non-Jewish, and sexual preferences. One episode features daters in their 60s and 70s, while another features a member of the LGBTQ community looking for love. In one episode, Gibson rides a motorcycle with one of bachelors because "I had to do it to make sure that the lady we picked for him would be safe," she said, jokingly adding, "I even suggested we go cross-country."

Mendelson, who was a contestant on season 12 of "America's Got Talent," has three grandchildren and grew up in Brooklyn, N.Y. Her grandmother, "a yenta," as she called her, was a matchmaker and used to say: "There's a cover for every garbage can, and if a guy has a club foot, he'll make up for it in bed."

Mendelson had her own matchmaking service in the 1990s and said she's "a natural" at setting people up.

Gibson is a great-grandmother and was one of the original dancers on "American Bandstand," Dick Clark's iconic music performance and dance television program. She has experience working with two matchmaking services, and has appeared in more than 65 television shows and films.

Rich is a bubbie to seven grandchildren and has been a cantor for 30-plus years. She was the first female cantor in history to serve a Conservative congregation. She does couples counseling and said she draws a lot of her wisdom about dating from the Torah.

"With age comes wisdom... we have a good idea of what works and what doesn't work in relationships, so I think it's important that they listen to us," Mendelson said about the singles who come on the show. "We know a little something that they might want to learn from."

After all, quipped Gibson, "We have 200 years of wisdom amongst us."

The three women, who didn't know each other prior to filming the show, are now like sisters, they said. Rich and Mendelson have even been helping Gibson learn about Judaism since the latter took a DNA test last year and found out she is 50 percent Jewish. She said since the discovery, she has been embraced by the Jewish community, JLTV and her fellow "bubbies."

"It was quite a shock, but really such a great thing. I love being Jewish," Gibson, who was adopted and raised Catholic, noted.  She said about her co-stars, "I have now two new Jewish sisters; it's wonderful!" To which Mendelson added, "We're glad to have you in the tribe."

The women agreed that some of the biggest mistakes people make when it comes to dating include getting into bed too quickly with a person, talking about themselves too much and complaining a lot throughout the date.

Rich celebrated her 30th wedding anniversary in October. She met her husband one Shabbat during Valentine's weekend. A member of the temple where she was a cantor invited her now-husband to come to the synagogue to meet her and hear her sing. After services, they talked, and Rich said "it was love at first sight, really."

But, she pointed out, "it did take someone to put us together: a matchmaker."

Mendelson, who celebrated her 16th wedding anniversary not long ago, met her husband at a bank. They lived in the same neighborhood, and she used to see him tend to his mother by helping her in and out of the bank, and holding the door for her. She told JNS, "You want a man who's good to his mother. That tells you something right there."

When Mendelson saw her now-husband after his mother passed away, she expressed her condolences and gave him her card with her contact information. He called a few weeks later, and they started dated. They were engaged after 45 days and got married in three months.

Gibson, who is searching for that special someone, told JNS, "I am single for many, many years. I know everything that doesn't work, so I can obviously give advice. A rabbi once told me: You can be right, and you can be right, and guess what, you can both be alone. You have to learn to compromise."

'Go out there and connect'

The show's host, Erin Davis, a New Yorker who runs a dating service, said her 95-year-old maternal grandmother-a Holocaust survivor-is a mentor and inspiration for everything she does. Meeting the "bubbies" from the show was an amazing experience for her, and she said "it meant more to me than I think most people could ever understand. They're really exceptional, and they've become friends and 'bubbies' to me."

She added about the show, "Today it's a high-tech society, and the personal touch of meeting people-the in-person connection these days-it's going away. We're kind of going old school with this show in more ways than one. It's refreshing; it's really amazing to see how powerful it is just to have people meeting again in person, and off their phones and engaging with other generations."

Davis works full-time as a dating coach and private "wingwoman" (someone who goes into a social situation with the purpose of helping people meet) for her clients. She started matchmaking as a hobby and seven years ago began a non-profit called Shabbatness, which organized Shabbat dinners and events for Jewish young professionals to meet. In 2014, she branched out and created an individual consultation service called Erin Davis Wingwoman.

Davis takes her clients out to events that fit their personality and interests, and she does "in-person strategic introductions" for them so they meet new people.

"That's the wingwoman part of the business," she said.

During the day, she meets with clients for five to six hours to help them with everything from analyzing their text messages, which she said is her No. 1 service, to helping them navigate dating apps. She tries teaching her clients that online dating services and dating apps should supplement other efforts in meeting people.

When asked about her take on dating apps, she mentioned that "if it's done in moderation, I think it can be a helpful thing. But most of the time, it's taking over people's lives and being the only thing they're doing these days."

She said some of the biggest mistakes singles are doing is walking into dates with negative energy, communicating the wrong way, losing the excitement and momentum early on in the dating process, and having an overall negative view on dating.

"People are treating dating kind of like a chore, where it's not fun anymore, or they're going straight from work," she explained. "I try to encourage everyone to give themselves transition time between work and a date, and to get really pumped up and excited about it because it's a chance for a new adventure, a new friend [or] a new business contact, not just your basheret."

Davis wants the show to inspire singles who are struggling in the dating world, but she also hopes that viewers will be encouraged to call their grandmothers more often or just appreciate the wisdom that the older generation has.

"I'll be the first to admit that my 95-year-old Holocaust survivor grandmother, who is sharp as a tact, even though she is a bit kooky [and] old-school Polish... up until I was like 30, I just dismissed everything she told me," related David. "And as I've gotten older, I really cherish every second with her. That woman has lived on this earth 95 years, and I cherish everything she says. I hope that people pick up the phone, and call their grandparents and just say hello. Realize what they have to offer us, and hopefully, just get reinvigorated to get out there and meet people and just stick to the basics."

"Our show is only 30 mins an episode, and that's all it really takes to just go out and try to make connections with each other," she added. "It doesn't take days and hours and weeks and months, and what should be like a chore. We can really go out there and connect-connect our friends and connect our families-and I'm hoping people will feel inspired to."

Special screening of ‘Bubbies Know Best’ at The Villages

Erin Davis, founder of Shabbatness, and host of “Bubbies Know Best,” will be at The Villages on March 25 for a special screening and Q&A of the “Active Seniors” episode. The bubbies will be helping a 70-year-old stand-up comedian named Marty find love. The show airs on JLTV at 8 p.m.