Israel has no plans to leave the Golan Heights 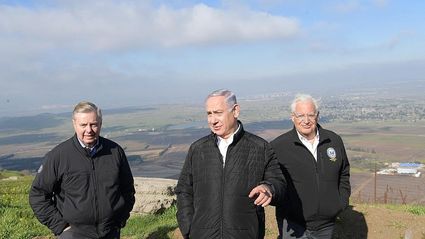 (JNS)-After Israeli Prime Minister Benjamin Netanyahu visited the Golan Heights this week together with U.S. Senator Lindsey Graham and U.S. Ambassador to Israel David Friedman, former U.S. Ambassador to Israel Martin Indyk set off a firestorm when he tweeted, "Like it or not, the Golan Heights are Syrian territory. Israel cannot give them up now given its legitimate security concerns. But to recognize Israel's annexation of territory that is not its own is to play with fire for partisan political purposes. No Arab state will accept it."

There is general consensus in Israel that the Golan Heights in Israel's north is essential to Israel's security, and that the region played an important role in Jewish history as well. Where that consensus ends is in regard to whether Israel can and should keep it.

Towards the end of the 1967 Six-Day War, Israel captured the Golan from the attacking Syrian army. In 1981, Israel's Knesset voted to apply Israeli law to the Golan Heights, but stopped short of formally annexing it. After 1967 and for the next 40 years, multiple attempts by a number of Israeli prime ministers to give the Golan Heights to Syria in exchange for peace ended in failure over Syrian refusal to cut ties with terror organizations and Iran.

Efraim Inbar, president of the Jerusalem Institute for Strategy and Security, told JNS that "international law recognizes acquisition of territory via defensive wars. In 1967, Syria was the aggressor."

Inbar noted that the Golan Heights has been in Israel's hands longer than it was ever in the hands of the Syrian state (from 1946).

Given the threat that Iran now poses in the region, as well as the fractured status of the Syrian regime after eight years of civil war, most Israelis view the region as essential to its security. On Wednesday, the Israel Defense Forces exposed a Hezbollah terror cell that was established in a border village in the Golan Heights.

"This morning, Israel exposed a Hezbollah terror network on the Golan Heights. Hezbollah is a terror organization. It's a proxy of Iran. It does Iran's bidding and this terror network is part of Iran's aggression against Israel," Netanyahu said in response.

During his tour, Graham demonstrated strong support for Israel's presence on the Golan Heights and promised to push for U.S. recognition of Israel's right to govern the region.

He told reporters: "There is no construct I can imagine now or any time in the future for the state of Israel to give the Golan up."

The senator added that he would ask U.S. President Donald Trump about recognizing the area.

"I will go back to the U.S. Senate, working with Senator [Ted] Cruz; I will start an effort to recognize the Golan as part of the State of Israel, now and forever," said Graham. "Because to give this territory up would be a strategic nightmare for the State of Israel..."

Companion resolutions calling on the United States to follow through with this recognition were introduced last month by Cruz, in addition to Sen. Tom Cotton (R-Ark.) and Rep. Mike Gallagher (R-Wisc.).

Support for Israel's control over the Golan Heights also has bipartisan support, with top Democrats, such as House Majority Leader Steny Hoyer (D-Md.) calling for the United States to recognize Israeli sovereignty. Rep. Josh Gottheimer (D-N.J.) also sent a letter to Trump in January, also calling for recognition of the Golan.

Additionally, the United States also changed its description of the Golan Heights from "Israeli-occupied" to "Israeli-controlled" in it annual global human-rights report released on Wednesday.

Gently mocking what he seemed to consider Indyk's apparent double standard, Inbar said, "I did not hear Indyk speaking about returning American territory in the West to Mexico." Inbar was referring to the disputed annexation in 1845 of the Republic of Texas by the U.S. Congress. Mexico refused to formally recognize its sovereignty.

'The status under international law'

Others, however, were less critical of Indyk.

Pnina Sharvit Baruch, a senior research fellow at the Israel Institute for National Security Studies, told JNS that she read Indyk's comments and said thought "he is right in his analysis."

Sharvit Baruch agreed with Indyk that the Golan "never belonged to Israel nor was it part of the [1947 U.N.] partition plan."

One Twitter user wrote in response to Indyk, "I beg to differ. UNSCR 242 says Israel has the right to 'secure and recognized boundaries free from threats or acts of force.' The Golan is necessary to ensure Israel's security, and therefore its annexation by Israel is compatible with UNSC 242."

Israel's continued presence on the Golan Heights has long been recognized by America as essential for the Jewish state's security.

In a speech last year  to the U.S. House of Representatives, Dore Gold, president of the Jerusalem Center for Public Affairs, noted that in 1975, President Gerald Ford wrote a letter to Prime Minister Yitzhak Rabin with respect to the Syrian front: "The U.S. has not developed final position on the borders. Should it do so, it will give great weight to Israel's position that any peace agreement be predicated on Israel's remaining on the Golan Heights."

Gold emphasized that the commitment made in the Ford letter was renewed on a number of occasions, including by U.S. Secretaries of State James Baker and Warren Christopher.

Yet Sharvit Baruch noted that while Israeli legislation applies there because of the 1981 Golan Heights Law, "this does not change the status under international law."

Regardless of whether or not Graham will be successful in his efforts to attain U.S. recognition, Sharvit Baruch agreed that, due to the current security situation, "it is logical for Israel to keep the Golan under its control."