'Mitzvah Maj' is fun for Jewish Pavilion volunteers and residents 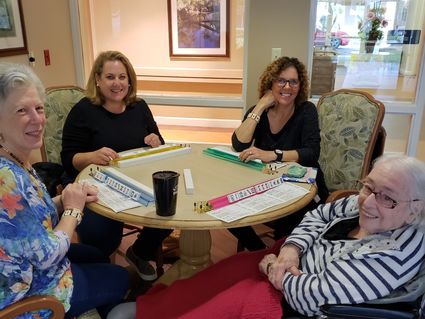 The clatter of a bagful of mahjong tiles spilling onto a table broke the quiet of the commons at Tuskawilla Nursing and Rehab Center on a recent Thursday morning. Jill Cousins had just arrived and was catching up with her friend Ruth Elison, a nursing home resident, as they began setting up the game. Debbie Meitin came next and immediately pitched in to set the dozens of tiles in place, Dale Perreault soon completed the foursome. Perreault, Meitin and Cousins are part of a pool of mahjong players, organized by Jewish Pavilion program director Julie Levitt, who come to the nursing home every other Thursday to play with Elison.

Rotating with Pavilion volunteer Meril Salzburg and a pool of subs, the group has been playing together for about six years, following Elison from the former Horizon Bay, now Brookdale Altamonte Springs, when she moved to Tuskawilla Nursing following a hospitalization. They have a breezy and companionable chemistry that comes from years of facing each other around a table for a 2-hour game. It's a friendship that began when the Pavilion's Levitt met Elison soon after she moved to Horizon Bay and learned that she was an inveterate player who loved the game.

"She used to play mahjong five or six days a week, and she got there, and she was lonely for it," said Levitt. Games such as mahjong are especially important for facility-bound seniors because they provide continuity from their previous lives and also contribute to preserving mental acuity and social engagement.

Levitt, herself a mahjong enthusiast who has been playing for about 15 years, decided that since Elison could no longer travel to games, she would bring the games to her. And the Pavilion's "Mitzvah Maj" program was born.

"It's a pleasure for us to play with Ruth because we know that it's such a pleasure for her," said Cousins, who was gearing up to defend her champion title at the annual JCC Maj Madness tournament at the end of January. "I look forward to it," responded Elison with a warm smile. She gives the other players little presents at Chanukah and other times to show her appreciation. "She has been very generous to us," said Perreault fondly.

The game moved quickly for the four very experienced players: the clack of tiles and din of conversation were occasionally punctuated with little gasps of frustration when someone's revealed tiles included one that another player needed to make her hand work. "Kvetching is part of mahjong," laughed Cousins after several such outbursts in quick succession.

With its six suits, eight jokers, elaborate rules, and multiple combinations for winning hands that change yearly when the National Mahjong League releases a card with many new possible variations, the game is complicated and requires close attention. "It's good for the mind," said Meitin. "That's why Ruth's 89 and she's still playing."

Around the time that Elison moved to Tuskawilla Nursing, Levitt got to know a new Jewish resident who had just moved to Brookdale Altamonte and was also a mahjong player. Levitt recruited more volunteers to play with the new resident on the second and fourth Tuesday of the month. Unfortunately, vision problems have prevented the woman from playing of late. But the game still continues like clockwork, because another resident, Joan DeCarlo, joined in when she moved to the facility about a year ago and was excited to come upon a game in progress.

On a recent Tuesday, DeCarlo sat at a table at Brookdale Altamonte and expertly rearranged the tiles in her hand to decide which to keep and which to pass along to Pavilion volunteers Melissa Masin and Leslie Intro during the preamble to the game known as "the Charleston" for its ritualized sequence of directional tile passes. The players use the passes to try to improve their hands before the game begins.

Asked how long she has been playing mahjong, the 85-year-old DeCarlo responded, "all my life," explaining that she had learned the game from kids in her neighborhood when she was in junior high school and had been playing ever since-even teaching the game at a community center in New Jersey years ago. Although the game is well known to be popular among Jewish women, DeCarlo is not Jewish. However, she very much appreciates the Jewish Pavilion volunteers who make it possible for her to continue playing a game that has been an important part of her life for so long.

"I love it-we have so much fun," said Intro as she took her turn. "I've been playing mahjong about 20 years, and my mom taught me how to play." Intro says that it helped her to make new friends when she moved to the Orlando area from Kansas City.

One of those friends was Masin, who has been volunteering for the Jewish Pavilion since she moved to Orlando 14 years ago and, along with Intro and Deanna Freedland and a few alternates, has been playing the twice-monthly games at Brookdale Altamonte for about two years. Masin learned the game while she was pregnant more than 21 years ago, also at her mother's suggestion. She moved to new towns several times after that and, like Intro, has found being a mahjong player to be helpful in forging new friendships.

Said Intro, "This is my favorite volunteer work because I get to play!" She has grown attached to DeCarlo and the other resident with whom she was originally recruited to play, and they very much look forward to visits with her and the other volunteer players.

In addition to enjoying the game, playing at the facility twice a month is a way for Intro to stay in touch with her friends who live there. "I like keeping an eye on them," said Intro.

To volunteer for Mitzvah Maj or any of the Jewish Pavilion's other programs, contact the Pavilion at 407-678-9363 or email NancyLudin@JewishPavilion.org.