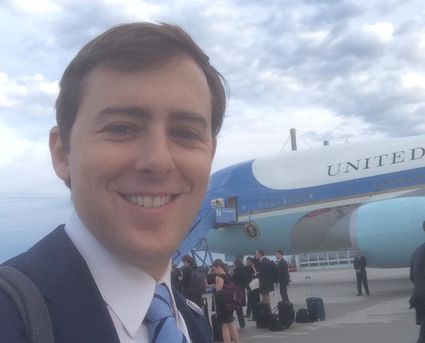 On April 5 at 6 p.m., the Writer’s Block Bookstore and The Roth Family JCC will present a VIP event—dinner with former presidential speechwriter and staffer David Litt—with a talk to follow.

David Litt entered the White House in 2011 and left in 2016 as a special assistant to the President and senior presidential speechwriter. Described as President Obama’s comic muse, Litt began contributing jokes to Obama’s speeches in 2009 and was the lead writer on four White House Correspondents’ Dinners. He is currently the head writer and producer for Funny Or Die’s office in Washington, D.C. Litt has also written for The Onion, McSweeney’s Internet Tendency, Cosmopolitan, GQ, Vanity Fair, The Atlantic, and The New York Times. He lives in Washington, D.C. with his fiancée, Jacqui, and their two goldfish, Florence and Duane.

In preparation for the discussion, there will be a closed Facebook discussion group, where participants can engage in a thoughtful, respectful, and educational discussion about David’s book. The closed group can be found at the Orlando JCC Cultural Arts Facebook Page with information on how to get a coupon code for a discounted copy of “Thanks, Obama.”

In this refreshingly honest memoir, Litt brings us inside Obama world. With a humorists’ eye for detail, “Thanks, Obama” describes what it’s like to accidentally trigger an international incident or nearly set a president’s hair aflame. With nearly a decade of stories to tell, Litt makes clear that politics is completely, hopelessly absurd.

But it’s also important. For all the moments of chaos, frustration, and disillusionment, Litt remains a believer in the words that first drew him to the Obama campaign: “People who love this country can change it.” In telling his own story, Litt sheds fresh light on his former boss’s legacy. Full of hilarious stories and told in a truly original voice, “Thanks, Obama” is an exciting debut about what it means—personally, professionally, and politically—to grow up.

The event will be held at The Roth Family JCC. VIP tickets are $50 per person for the dinner and includes a copy of the book in paperback; speaking engagement admission tickets include the paperback and are $20 each, with an additional $5 for a plus-one. You can find tickets for both the VIP dinner and speaking engagement at the JCC visiting authors website.