After eight years of civil war, the return of Syria to the Arab world 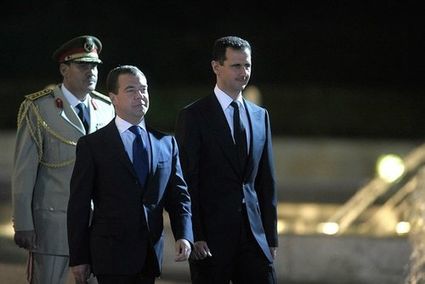 Syrian President Bashar Assad (r) with Russian Prime Minister Dmitriy Medvedev. Russia has vested interests in what happens as part of the current quagmire in Syria.

(Research Institute for European and American Studies via JNS)-Nearly eight years into the civil war in Syria, the government forces led by Syrian President Bashar Assad-and supported by Russia, Iran and Hezbollah-have regained control of the majority of Syria. As the war appears to wind down, diplomatic efforts are being made by the Assad regime and Arab countries to normalize relations.

The victory of the Assad regime, Russian regional influence, the withdrawal of American forces from Syria, the Iranian threat and the weakness of the Arab Sunni alliance are reasons that have led Arab countries to improve relations with the Assad regime.

The visit of Sudanese President Omar al-Bashir in Damascus in December 2018-the first Arab head of state to visit Damascus since the start of the Syrian conflict-coupled with the reopening of the UAE's embassy in Damascus on Dec. 27, the first Syrian passenger flight to Tunisia since 2011, and the opening of the border crossing between Syria and Jordan in October are part of the efforts to improve relations.

The Arab League is set to meet on March 31 in Tunisia.

Sudan: Al-Bashir visited Assad in Damascus on Dec. 17, 2018, becoming the first Arab leader to the country since the conflict broke out in 2011. He hosted at the presidential palace, where the two heads of state reportedly discussed strengthening bilateral relations, and the latest developments in Syria and the region.

The UAE: The United Arab Emirates reopened its embassy in Damascus on Dec. 27, 2018. The UAE closed the embassy in the early stages of the Syria conflict, which started in 2011, and backed rebel groups against Assad's forces.

The UAE Minister of State for Foreign Affairs said that the UAE wanted to boost the "Arab role in supporting the independence, sovereignty and territorial integrity of the Syrian Arab Republic. The UAE decision... came after a conviction that the next stage requires the Arab presence and communication in the Syrian file."  He added that initiating communication with Damascus will not leave the region open to Iranian interference.

UAE Minister of Foreign Affairs Sheikh Abdullah bin Zayed Al Nahyan told reporters on March 6 during a joint press conference with Russian Foreign Minister Sergei Lavrov, during his visit to the emirate that: "We have worked with our Russian brothers and others to discuss the containment of the crisis but to also contain Syria. When we say containment, we are talking about Syria being a part of the Arab region; being part of the Arab countries and efforts. Unfortunately, we are now seeing Syria far from that."

"We believe that we are still at the beginning of this march but this requires joint efforts from Damascus and Arab parties to work together. We are still far from this situation, but I believe there are an intention, and a desire, but it still requires much work from different parties," he said.

Egypt: The Syrian National Security chief Maj. Gen. Ali Mamlouk traveled to Egypt in December 2018, at the invitation of Egyptian intelligence chief. This was not Mamlouk's first public visit to Egypt. During another publicized trip in 2016, Mamlouk and Egyptian intelligence officers agreed to coordinate political positions and strengthen cooperation in fighting terrorism.

Russia's long-term strategy is to extend its influence over the whole region.

Syria has been expelled from the Arab League and boycotted by its neighbors since its civil war erupted in 2011. But Egypt has maintained security contacts with Assad's government throughout, negotiating limited conciliation deals between Syrian armed groups and the Syrian government.

Egyptian President Abdel Fattah El-Sisi said an in 2017 that he is prepared to help the Syrian army because it's a national one, as opposed to militias. And in contrast with Saudi Arabia's position, Egypt voted at the United Nations in favor of a Russian resolution proposal that ruled out condemning Syria. Egypt would prefer that Syria stay within the League. Expelling it did nothing to change Assad's policy, Iran grew stronger against the Arab coalition and Turkey became the proprietor of the northern part of the country.

Tunisia: A flight from Damascus landed in Tunisia's Habib Bourguiba Airport on Dec. 27, 2018, marking the first direct flight between the two countries since the outbreak of Syria's civil war eight years ago. Tunisia, the birthplace of the Arab Spring, had supported the Syrian opposition when the war broke out after peaceful protests were brutally repressed by the regime. But relations have warmed as the fighting winds down, with the Syrian government once again in control of most of the country, thanks largely to Russian assistance.

Jordan: The Nassib border crossing between Jordan and Syria officially opened in October 2018 to civilians and trade for the first time since it was closed in 2015.

Oman: The Syrian premier praised Oman's decision to maintain ties with Damascus despite the conflict. The statement came as the Syrian and Omani foreign ministers met in the Syrian capital to discuss ideas for ending the seven-year war.

Bahrain: The Syrian foreign minister and his Bahraini counterpart had also turned heads in September 2018, after they greeted each other with a hug on the sidelines of the U.N. General Assembly in New York.

Syria was expelled from the League and other Arab institutions in 2011 following its brutal suppression of the uprising against the Assad regime. In 2018, several member states have called for it to be reinstated with Russia also backing the initiative.

Syria attended a meeting of Arab states on March 3 for the first time since its conflict broke out in 2011. Syria's parliament speaker, Hammouda Sabbagh, traveled to Amman to attend the 29th Conference of the Arab Parliamentary Union. His Jordanian counterpart, Atef al-Tarawneh, called in a speech for regional countries "to work toward a political settlement to the Syrian crisis... and for Syria to regain its place" in the Arab world.

Another event is an Arab League summit to be held in Tunis on March 31. The gathering, according to Tunisian President Beji  Caid Essebsi, can offer an opportunity to "strengthen Arab unity" and could also lead to Syria's return to the Arab League.

Russia has called on the Arab League to restore Syria's membership into the organization:

In February 2018, Russian Foreign Minister Sergey Lavrov said that "leaving Damascus out of the Arab League is not helping the peace efforts." Lavrov added that the League would take a more important and more active role if Syria were a member.

In December 2018: Col. Gen. Mikhail Mizintsev from Moscow's National Centre for Defense Management said that "the restoration of Syria's position on the global scene, in particular its membership in the League of Arab States, is an extremely important issue. It will serve as a convincing signal for the international community about the return of the country to peaceful life and the promotion of the process of the political settlement of the crisis, as well as push the refugees toward making positive decisions on the return to their homes."

Unlike other Arab countries, during a joint conference with Russian Foreign Minister Sergei Lavrov in Riyadh on March 4, the Saudi Minister of State for Foreign Affairs Adel al-Jubeir said it is premature to determine the return of Syria to the Arab League. When asked about the Kingdom reopening its embassy in Damascus, al-Jubeir said that this was also too early to determine. Al-Jubeir stressed that both Riyadh and Moscow agree to Syria's sovereignty, as well as the need for a political solution to help Syria build a better future.

International sanctions on the Assad regime in Syria

The United States, the European Union, the United Nations and several other regulatory entities imposed sanctions on Assad regime in Syria in response to the Syrian government's support of international terrorism, and violations against democratic and human rights in the country. Since first being implemented, the sanctions have been strengthened several times due to escalating violence in the region.

The European Union: Sanctions have been in force since Dec. 1, 2011, and are subjected to annual review. The sanctions include a blacklist of Syrian officials for their role in Assad's "violent repression" of civilians. Other bloc of sanctions including an embargo on Syrian oil, investment restrictions and a freeze on Syrian central bank assets within the European Union.

They also cover export restrictions on equipment and technology that Damascus could use to repress its people, as well as those that it could use to monitor or intercept Internet or telephone calls.

The E.U. countries on March 5 added Syria's interior minister and six other ministers to a sanctions blacklist. With the additions, there are 277 people under E.U. sanctions for their role in the "violent repression" of civilians in Syria and for their links to the Assad regime. The E.U. has also frozen the assets of some 72 entities.

As the war in Syria appears to wind down, diplomatic efforts are being made by the Assad regime, and Arab and Western delegations, to prepare for the reopening of diplomatic missions, marking a significant diplomatic boost for Assad.

Since 2018, Syria has been making steps towards the country's political reintegration into the region. In October, Assad said that Syria had reached a "major understanding" with Arab states after years of hostility.

The Arab League is set to meet on March 31 in Tunisia, with some member states calling for Syria's return to the Arab League, which suspended the country's membership in November 2011 as the death toll mounted in its war. The Arab League's secretary-general, veteran Egyptian diplomat Ahmed Aboul Gheit, said in April 2018, that the decision to suspend Syria had been "hasty."

The re-integration of Syria into the Arab fold will support the Israeli interest.

During the war in Syria, Russia allied with the Assad regime, Iran and Hezbollah against the Syrian opposition that was backed by the Arab Sunni countries. Russia transitioned from leading and coordinating the Iranian, Hezbollah, Assad forces and its own forces in the war to diplomatic moves to stabilize the situation and restore Assad's status in the Arab world.

The Russian interest in bringing Syria back to the Arab League is based on the desire to achieve legitimacy-first Arab, then later international-for Assad's regime, in addition to recognition of Russia as a dominant military presence, and political regional and global power.

Russia's long-term strategic interest is to extend its influence over the whole region; the re-integration of Syria into the Arab fold will serve its goals. Russia is also interested in reduction of the Iranian and Turkish influence, and involvement in post-war Syria. The shift towards the Arab fold will meet this interest. 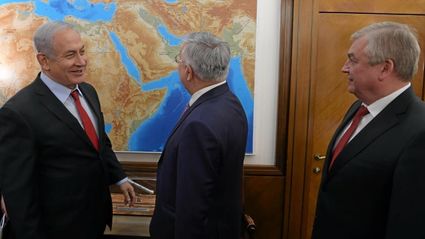 The United States has changed its stance on the Syrian regime and U.S. Special Representative for Syria Engagement James Jeffrey said that Washington is not looking for a "regime change" in Syria, but rather a "different" government, contradicting previous statements that had called for the removal of Assad.

Israel has a strategic interest to contain the influence of Iran in Syria and Lebanon; moreover, the re-integration of Syria into the Arab fold will support the Israeli interest. The Syrian improved relations with the Arab world will not change the Israeli "red lines" policy in Syria.

Col. (res.) Dr. Shaul Shay, a former deputy head of the National Security Council of Israel, who today serves as director of research at the Institute for Policy and Strategy at the Interdisciplinary Center in Herzliya.