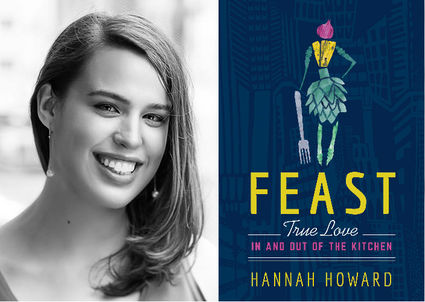 The Orlando Chapter of Hadassah presents “Lunch with Hannah Howard,” noted author and food expert on Tuesday, April 2, at Ohev Shalom at 11:30 a.m.

Howard will discuss and sign her highly praised memoir “Feast: True Love In and Out of the Kitchen.”

Howard spent her formative years in New York eating, drinking, serving, bartending, cooking on a hot line, flipping giant wheels of cheese, in such Manhattan landmarks as Picholine and Fairway Market. She writes about delicious things for a living, appears in food videos, teaches cheese and cooking classes, and hosts culinary events.

Howard received her BA degree from Columbia University in creative writing and anthropology in 2009. She is currently pursuing her MFA in creative nonfiction at the Bennington Writing Seminars, where she is the recipient of the Lucy Grealy Scholarship.

A coworker at New York Natives, where she was a columnist, introduced her to his agent, who signed her after reading 50 pages of sample chapters of her memoir. Together they created a proposal, which was rejected by several publishers.

And then somebody wanted it, and that somebody happened to be poet Morgan Parker ’10—with whom Howard had taken a poetry class—and who was now an editor at Amazon’s literary fiction and nonfiction imprint Little A. “Because it’s such a personal, vulnerable memoir, working with somebody I knew just felt like a good idea, and it did turn out to be,” Howard says. “They gave me a lot of TLC, but then I had the draw of Amazon to sell and market the books.”

Her advice to future aspiring authors is to “sit at your laptop and write even when it hurts.”

The hurt is worth it, she promises: “Even now I get nervous about how the book is doing in the world, and I think that the real answer is: If a few people read something and feel less alone, and it changes something in them, then it’s totally worth it.”

Howard mentors women recovering from eating disorders, on building a happy, healthy relationship with food and themselves.

She currently resides in New York.