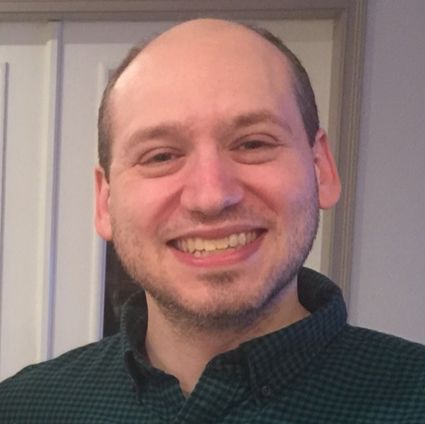 The Jewish Pavilion welcomed Cantor Lance Rhodes as a new program director in early March. Cantor Rhodes is coordinating Pavilion programming at all of the south Orlando senior living facilities as Walter Goldstein, who has served as program director for several years, steps down to focus on his health.

As a longtime Central Floridian who grew up in Ormond Beach, Cantor Rhodes is very pleased to have a new roll in serving seniors in this community. Coming from a family that was steeped in Jewish life and very musical, becoming a cantor was a natural fit, and after earning a bachelor's degree in Music Business from University of Miami, he enrolled at the H. L. Miller Cantorial School at Jewish Theological Seminary, earning an M.A. in sacred music and investiture as a cantor. During and after his training, he has served as cantor and interim cantor at congregations in New Jersey, New York, Ormond Beach and Texas.

In his years of service as a cantor, Rhodes has developed a special interest in serving seniors. He has often performed concerts and directed and coordinated instrumental and choral ensembles at senior living centers as well as spent time with residents and provided them with pastoral care. Rhodes said he looks forward to continuing these kinds of experiences as a program director for the Jewish Pavilion.

Pavilion CEO Nancy Ludin said, "We are very fortunate to have Cantor Lance to delight our seniors with his beautiful singing and strong connection to Judaism. He will be a wonderful asset to the Jewish Pavilion as he carries on Walter's legacy of superb and uplifting programs. Everyone at the Jewish Pavilion wishes Walter all the best as he focuses on recovery, and we've heard the same from so many of the seniors, facility staff and volunteers whose lives he has touched."

In another staffing change, Jewish Pavilion program director Judy Appleton is retiring after 9 years of dedicated service. She came to the Pavilion at a time when the organization was refining its model of service, and Appleton was an integral part of that process. "The staff meetings of my first year-we were just making it happen," Appleton recalled. "We were creating it and molding it to what it needed to be."

A founding member and former board member of Temple Shir Shalom as well as religious school teacher, Girl Scout troop leader and room mom, Appleton approached the job with a spirit of service to the community. Her primary reward, she said, "was when I would see Jewish elders light up with excitement when they felt these connections to their Judaism."

"Judy has a special way with people that has made her an excellent program director," said Ludin. "She bonds with the seniors and makes sure she has one-on-one moments with each of them. Fortunately for us and for them, she will continue on as a volunteer."

Current Longwood, Lake Mary and Sanford program director Susan Bernstein will extend her hours to take on the northeast quadrant of Orlando that has been Appleton's purview. Bernstein is confident her years of experience as a Pavilion volunteer and program director will serve her well. "It's just a matter of extending the reach that I now have," she said. "I enjoy doing what I'm doing."

One of Bernstein's priorities will be finding new volunteers who would like to do a mitzvah and make meaningful connections with seniors as a room visitor. Anyone who is available to make occasional day or evening visits to Jewish seniors in facilities near their homes in Winter Park, Oviedo, Avalon Park and Winter Springs (or anywhere else in metro Orlando) should contact the Jewish Pavilion at 407-678-9363 or email NancyLudin@JewishPavilion.org.