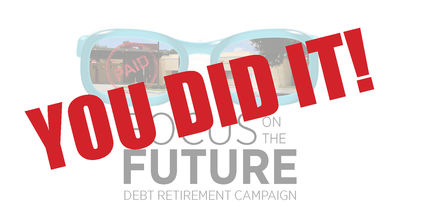 The Jewish Community Campus in Maitland is about to be debt-free for the first time in a generation, thanks in part to a resoundingly successful 24-hours fundraiser held March 25-26.

Just three years ago, the campus at 851 North Maitland Ave., which is owned and managed by the Jewish Federation of Greater Orlando, carried a debt of nearly $4.5 million. At that time the Federation launched the Campus 2020 Debt Retirement Campaign with the goal of eliminating the debt by Jan. 1, 2020. Contributions to Campus 2020 slashed the debt by nearly $1 million in the first nine months.

The Federation has continued making regular payments on the debt, and the Campus 2020 campaign has continued to bring in new gifts. But two developments have made it possible to pay off the debt even earlier than the Jan. 1, 2020, goal:

1. The anticipated proceeds from the upcoming sale of a vacant campus building, constructed in 2003 and formerly occupied by the Jewish Academy of Orlando; and

2. A final push to close out the Campus 2020 campaign with Focus on the Future, a 24-hour campaign to raise $113,000 through community contributions and a 100 percent match from The Harris Rosen Foundation.

The Focus campaign was, by design, a slow build, unveiled over a week's time in a series of vague teaser ads in Federation emails and social media. The ads depicted blurred images of the campus and a red "PAID" stamp with the promise that the picture would come into focus soon.

Readers of the Federation's weekly Fed Friday email were let in on the secret three days before the campaign began, with a formal announcement by Federation Executive Director Keith Dvorchik.

Dvorchik reminded readers that a successful campaign would be about much more than getting rid of a number on a balance sheet, because freeing campus agencies of debt obligations would have a ripple effect. "By every measure," he wrote, "the elimination of this debt will be a game-changer for our community, resulting in approximately $400,000 in annual combined savings for the Federation, The Roth Family JCC and Jewish Academy of Orlando."

The Focus on the Future campaign launched at 6 p.m. March 25 with emails and social media posts. Within minutes, the local Jewish community jumped into action, submitting gifts ranging from $18 to $10,000-all of which were doubled by the Rosen Foundation match. By the next morning the Federation already had raised 45 percent of its goal. Gifts continued to stream in throughout the day on March 26, and the last two hours would see the Federation shatter its goal. Donor Andy Pargh had the distinction of putting the Federation "over the top" with his $10,000 gift. All told, the campaign exceeded its goal by more than $40,000, all of which will be used toward the debt.

"The success of this 24-hour campaign, combined with the anticipated sale of the vacant building, means that this campus will be debt-free for the first time in a generation," Dvorchik said. "Even those who don't use the campus will benefit because this frees up the Federation, The Roth Family JCC and the JAO to focus on our respective core missions, and those missions extend far beyond the confines of the Jewish Community Campus."

You can read more details about the campus debt and see some of the donors who made the Focus campaign a success at jfgo.org/focus.