US: Israel has sovereignty over Golan 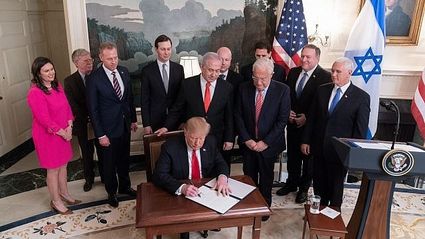 (JNS)-The formal recognition of Israel's sovereignty in the Golan Heights by the United States could not have come on a more sobering day for Israelis. As rockets were being launched deep into the central Israel by the terror group Hamas in Gaza, the importance of the Golan Heights for Israel's security was on full display.

In his remarks at the formal signing of the presidential proclamation at the White House, Israeli Prime Minister Benjamin Netanyahu told U.S. President Donald Trump that the region was "invaluable" to Israel's defense.

"Your proclamation comes at a time when the Golan is more important than ever for our security, when Iran is trying to establish bases in Syria to strike at Israel," said Netanyahu.

At the same time, he highlighted Israel's historic and legal right to the region.

"Your decision to recognize sovereignty is a two-fold act of historic justice: Israel won the Golan Heights in a just war of self-defense, and the Jewish people's connection to that land goes back generations."

Despite the strategic and historical importance of the Golan Heights for Israel, the United States remains alone in recognizing Israel's claim of sovereignty. Many other countries view Israel's control over the region, which Israel gained in the 1967 Six-Day War, as illegal under international law.

But according to Kontorovich, "these international legal arguments lack merit."

He pointed out that the relevant international law "only prohibits taking territory in a war of aggression."

He noted that war in June of 1967, during which Israel captured the Golan Heights from hostile Syria, "was at the time generally regarded as a lawful, defensive war, in response to constant Syrian and Egyptian attempts to destroy Israel."

Kontorovich warned that "if international law does not allow attacked countries to make border changes in some circumstances, it would actually invite aggression because the attacking country would be ensured against losses to the defender."

A main argument among Israel's detractors is that such recognition sets a bad precedent and will encourage other countries to capture and annex territory that is not theirs.

Kontorovich denounced this argument as empty, saying the notion that this move will invite aggression is absurd for another reason: "Israel's sovereignty has only been recognized after it made multiple good-faith peace efforts to return the territory; after Syria lost all legitimacy by committing mass atrocities; and, of course, after a 52-year waiting period. That is a demanding formula that will certainly not invite adventurism."

The move away from an unsuccessful paradigm

Another point is that U.S. recognition sends a clear and direct message to the Arab world.

David Weinberg, vice president of the Jerusalem Institute for Strategy and Security, told JNS that "Trump's move is important in that it teaches a lesson to Arab leaders: The longer you wait to make peace with Israel, the less you're going to get. Assad, the father [Hafez] and son [Bashar], blew their opportunities to make peace with Israel and regain control of the Golan. Now, Syria pays the price."

And it offers an important lesson to the Palestinians. According to Weinberg, "Trump is saying: You can reject my about-to-be-presented peace plan, but know that if you do, you'll lose."

Trump's actions demonstrate a clear and definite move away from the unsuccessful paradigm that existed for many years with regard to the Arab-Israeli conflict.

If the Palestinians continue to reject Israeli offers for peace, "the U.S. could yet recognize Israeli annexation of parts of Judea and Samaria, or step back from support for Palestinian statehood," said Weinberg.

"In short," he concluded, "Trump's move changes the deleterious dynamic long in place, in which the Palestinians could safely assume that their rejectionism of plan after peace plan only intensified the pressure for greater Israeli concessions."

As Trump noted when he sat down to sign the proclamation, "This was a long time in the making. It should have taken place many decades ago."