How Coca-Cola prompted the advent of Passover-friendly food companies 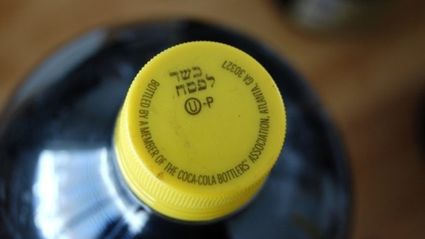 A kosher-for-Passover bottle of Coca-Cola, distinguished from ordinary Coca-Cola bottles by its yellow cap and special "hechsher."

(JNS.org)-In the 1930s, Rabbi Tobias Geffen of Atlanta began to investigate the hidden ingredients inside mass-produced foods and to evaluate whether those ingredients conflict with kosher laws. He then set a precedent by getting The Coca-Cola Company to make a kosher-for-Passover version of its soft drink, convincing the company to substitute the grain alcohol used in the processing of its drink to alcohol derived from molasses.

Geffen's achievement was a response to the fact that in the 1920s, "Coke became an incredibly popular beverage in America," and "Jews adopted a custom of making it available to children during the Passover seder in lieu of wine," historian Roger Horowitz-whose book, "Kosher USA: How Coke Became Kosher and Other Tales of Modern Food," was published in April 2016 by Columbia University Press-told JNS.org.

This step by Coca-Cola stood out at a time when few mainstream food manufacturers were making kosher-for-Passover products.

"Coke was an enormous consumer product in the 1930s, and jealously guarded its formula," Horowitz said. Much of the company's decision, he explained, rested on its confidence in Geffen that he would not reveal the drink's secret ingredients, and the episode was "an enormous asset in persuading other conventional food firms to secure kosher certification."

Geffen personally issued a kosher-for-Passover certification on Coke, eventually passing the baton to another rabbi. Meanwhile, the founder of the Orthodox Union's (OU) kashrut division and kosher-certification labeling, Abraham Goldstein, was another figure dedicated to the science of figuring out what's inside foods and whether those ingredients are acceptable for Passover as well as for kosher-observant consumption year-round. He was particularly interested in ice cream, surveying its manufacturers to determine what they were putting inside their products and ultimately deciding that Breyers ice cream, for instance, is acceptable to eat during Passover.

But Goldstein was simply reviewing foods as they existed at the time. The fact that Coca-Cola chose to make a distinct version of its drink for Passover, therefore, was a big exception.

Rabbi Moshe Elefant, Chief Operating Officer of the OU's kosher-certifying arm, told JNS.org that subsequently, the OU began to certify Coke for Passover around 1989-1990, after the company removed high fructose corn syrup from its Passover drink and replaced it with sugar. These bottles are known today for their distinct yellow caps.

When the OU certifies a product as generally kosher, it is typically sufficient for rabbinical supervisors to make occasional visits to a company to make sure that the product is being produced in accordance with kosher standards. When it comes to Passover, however, making a product that is kosher for the holiday requires full-time rabbinical supervision. One other food that illustrates this situation is quinoa, a type of grain that was only in recent years certified as both kosher and kosher for Passover by the OU.

"One of the staples of the kosher diet now is sushi. But there's a problem with sushi on Passover because sushi is made with rice, and Jews of Ashkenazi descent don't eat rice on Passover. How are you going to survive eight to nine days without sushi? You make it with quinoa," Elefant said.

After many public requests for the OU to certify quinoa, rabbis needed to make their decision based on ancient texts and rules that were written in an era when quinoa did not exist.

"After much deliberation and discussion, we determined that quinoa is not part of that legume family. Then we sent a rabbi to the mountains of Peru, where quinoa grows and is packaged," where he needed to see if "the quinoa is packaged or processed in the same machinery or equipment as non-kosher for Passover products, [which] would for lack of a better word contaminate the quinoa," Elefant explained.

As a result-and similarly to how kosher-for-Passover Coke is produced-about once a year, producers of kosher-for-Passover quinoa make a certain amount of quinoa specifically for Passover. It is labeled "OUP," with full rabbinical supervision of the production process. Then the rabbis go home, and come back later for the next production round.

Today, many food ingredients, as well as the final food product, are often made far away from the grocery shelves, particularly in the Far East, Elefant said. Therefore, the OU has become a highly global operation, with a presence in 80 countries. In addition, "the equipment used to manufacture food is all obviously new equipment that didn't exist in the time of the Talmud," he said.

In the current era of mass food production, the OU has needed to find out how to make production equipment kosher without the guidance of original source material with instructions on the issue.

Contemporary rabbis need to be "extremely knowledgeable in understanding the machinery that manufactures food," and in knowing how to conduct the koshering process without breaking "a piece of equipment that costs millions of dollars," Elefant said.

One issue that comes up with regard to Passover and food, according to Roger Horowitz,  involves oils that may be used during the holiday. For instance, corn oil cannot be used, so rabbis must figure out how to control the oil while it is being shipped in trucks acrosslong distances in order to make sure the oil is not contaminated. All tankers need to be washed and sealed by rabbis before they can be reloaded, and any holding tanks must also be monitored by rabbis. Then, inside the factories, sophisticated control systems are also in place.

Elefant cited another example of a product the OU has certified for Passover-canned tuna. "Over the years, we have made [specialized Passover] runs of tuna for Chicken of the Sea, Bumblebee, etc.," he said.

In yet another illustration, coffee doesn't always require an OUP label to be considered as kosher for Passover. The OU also recommends one-ingredient foods that are considered kosher for Passover without requiring the foods to be labeled with an OUP. Decaffeinated coffee, however, can only be consumed on Passover if the decaffeination process does not involve an alcohol made out of grains or corn. Brands that the OU deems appropriate for Passover include Nescafe's Taster's Choice and Folgers.

"We had to review the entire decaffeination process to make sure there's no issue," Elefant said, noting that in these cases, the products were deemed appropriate for the Jewish holiday as they are. Yet in the case of Bosco chocolate syrup, which has also been labeled OUP, a separate version of the syrup needed to be made for Passover.

Statistics compiled by Lubicom Marketing Consulting (an agency working with kosher food producers) for last year's Kosherfest trade show revealed the production of 600 new products for Passover, and that 40 percent of annual kosher food sales came during the roughly month-long period including and surrounding Passover.

Passover is the "most widely observed holiday on the Jewish calendar," said Lubicom President Menachem Lubinsky, with an estimated 70 percent of all U.S. Jews attending at least one Passover seder.

Lubinsky added that making special Passover runs of products does not stop at food.

Aluminum foil companies producing kosher-for-Passover foil "have to use cleaning agents that are [suitable] for Passover. They do a special run and they have an OUP on them. The amount of those products that is consumed for Passover is enormous...[and] it's good business [for the company to produce them]."

On the marketing side of the issue, Lubinsky sees a growth in the advertising of kosher-for-Passover products.

"You see a lot of supermarket ads that highlight Passover specials. There are also a lot online apps with Passover products. I see technology being used in a big way," he said.

When a mainstream, non-Jewish company approaches Lubicom with an interest in marketing a special kosher-for-Passover version of its product, Lubinsky first determines if the product is unique, and if it is, he suggests that the company "be very user-friendly in teaching consumers how to use the product" through recipes, meal ideas, and tie-ins with other products that are also kosher for Passover.

As for Coca-Cola, when it had removed high fructose corn syrup from its ingredients in 1990, it did so in response to Passover consumers' demand. But in more recent years, Elefant noted, consumers "are actually trying to stay away from high fructose corn syrup" for health reasons, prompting a growing number of food producers to remove the substance from many products and use natural sugars or fruit sugars as substitutes. This makes such products easier to certify as kosher for Passover.

In the end, Elefant said, "it always boils down to dollars and cents."