Matzah mania! Who knew that mixing flour and water could be so nuanced? 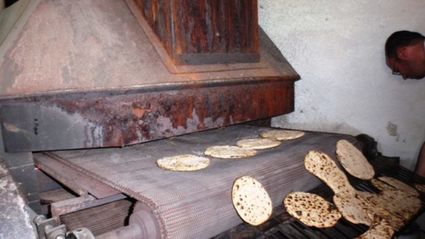 Hand-made matzah comes out of the oven.

(JNS)-How hard can making matzah be? Mix flour and water, and bake.

Actually, there are various ways that one can go about producing matzah-and the results are all a little different.

When you're standing in the supermarket just before the holiday trying to choose matzah, it might help to know what you are looking at. It's not just the orange box versus the blue box, or even hand-made versus machine-made. According to leading kashrut supervisors at the Star-K and Orthodox Union (OU) kosher-certification providers, there can be differences between the flour, the baking process, and even the time it takes for the matzah to be produced.

In all three cases, the "watching" aspect ("shmurah" in Hebrew) is meant to ensure that the wheat does not get wet and transform into chametz (a leavened product). The longer the grains are watched, the more kosher-and generally, the more expensive- the matzah will be.

The most obvious difference between types of matzah is how the matzah is produced: hand and machine are the two most common types. Rabbi Moshe Elefant, chief operation officer of the OU's kashrut department, says hand-made matzah precisely reflects that description.

"This is the way it was always done before the advancement of machinery, and the way it is still done in many communities," Elefant says.

The reason that many people still opt for hand matzah is for the intention behind the process, explains Elefant. Not only is it a Torah commandment to eat matzah on Passover, but according to some opinions, the Torah requires us to perform the act of making matzah "l'shmah," for the sake of the mitzvah.

"Many people prefer hand matzah for the seder because the baker has to have that intent of making matzah and a machine does not have the ability to have intent," says Elefant.

Yet making matzah is an inexact science, Stein says, explaining that not all machine matzah or all hand matzah is made the same. "If you don't know where you are getting your hand matzah, it is better to get machine matzah," he says.

There are three types of machine matzah as far as the level of kashrut is concerned, but much more variation in hand matzah practices. Stein says the Jewish sages teach that it takes at least 18 minutes for matzah dough to become flour. The kashrut level of matzah changes depending on how careful the factory is about these 18 minutes.

"Some regular factories will have someone standing there with a vacuum cleaner that will clean the dough as it falls off," says Stein. "Some don't, and the machine goes straight through the cycles without cleaning. Really, anything that falls would be botul ('insignificant' in Jewish law), but this is not the best situation."

The next level of machine matzah is 18-minute matzah. This is matzah produced in a factory where the machinery is designed to be dismantled and thoroughly cleaned every 18 minutes.

In either case, there is always a team of dough kneaders who ensure the dough not being fired is constantly needed; as long as the dough is being kneaded, it will never become chametz.

A final and strictest level is matzah "chabura." According to Stein, in this situation, all dough must make it into the oven within 18 minutes, whether or not it's being kneaded. After 18 minutes, the machinery and all of the tools, bowls, and other materials are thoroughly cleaned.

"These people make sure there is no chametz left over," says Stein. "The price of this level-and each different level-is significantly different."

There are some smaller communities, especially variant sects of Hasidim, that add extra levels of stringency to their matzah baking practices. For example, according to Stein, there are those who mill their matzah by hand.

"This is not a very popular chumra (stringency)," says Stein, noting that today this is mostly practiced by the Sanzer Hasidim of Kiryat Sanz, in the Israeli city of Netanya.

Finally, there are those who hold that the matzah eaten at the seder must be made in the afternoon on the same day Passover starts. The holiday begins on the 14thday of the Hebrew month of Nissan, when the Passover sacrifice was brought to the Jewish Temple. The matzah being baked that afternoon models the time of the sacrifice. Such an enterprise requires great care.

"People who do this will start at chatzot (mid-day)," says Stein, who does this himself in his synagogue in Rehovot, Israel.

Today, there is a growing community of gluten-free individuals who cannot eat matzah made of wheat flour and water. For those people, oat matzah is produced. Stein says he knows of no hand-made oat matzah factories, but that the product is becoming plentiful on the grocery store shelves.

"It is very difficult to eat oat matzah if something isn't done to take the bitterness out," says Stein. "The oat matzah is very expensive."

Sephardim eat a softer version of Ashkenazi matzah. There is "nothing theoretically wrong with this," says Stein.

"Ashkenazim don't eat it because we are afraid. The Ashkenazi minhag (custom) is to eat only matzah that is crisp and thin," he says.

Egg matzah-which is no longer made with eggs, but rather with apple juice or grape juice, according to Elefant-is another type of matzah that Sephardim love and Ashkenazim should stay away from, unless there are extenuating circumstances.

"The halacha (Jewish law) says that other liquids mixed with chametz make the flour rise quicker," says Elefant. "Avoid it, if you don't have to have it." The same goes for chocolate-covered matzah.

"On Pesach, we try to avoid foods that are chametz or can become chametz with one exception: matzah," Elefant says with a chuckle.

He continues, "Pesach is a holiday of customs and traditions. Each family and community has its own traditions that are passed down from generation to generation. One thing remains consistent: matzah... The matzah we eat is forever."