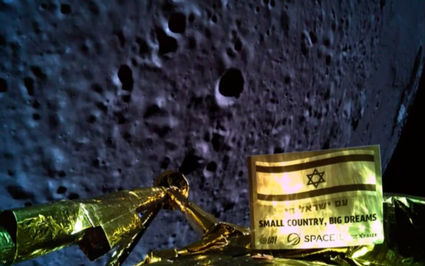 The last shot Beresheet sent of landing before crashing onto the moon's surface.

The Israeli SpaceIL spacecraft Beresheet-Hebrew for Genesis-is on the moon, but not in the way that was hoped. Beresheet snapped its first "selfie," with the help of NASA, as it was landing, 22 kilometers (13.67 miles) from the surface. Then it was over. Apparently it crashed on the moon's surface after traveling 47 days and 6.5 million kilometers (4,038,912.75 miles) through space.

In the last few moments before it was to land, communication was lost, then recovered. Then the main engine failed and recovered, only to have complete communication lost in the final moments of the landing.

"We had a failure in the spacecraft, we were unable to land successfully," a SpaceIL engineer said during the live stream. Still the crowd in the control center applauded the attempt.

"If at first, you don't succeed, you try again," Prime Minister Benjamin Netanyahu said in front of the SpaceIL team and viewers. "Three superpowers have launched spaceships to the moon and little Israel is now the fourth country to accomplish this," he added.

SpaceIL chairman Morris Kahn said he "doesn't regret for a moment" the decision to back the Israeli spacecraft Beresheet. 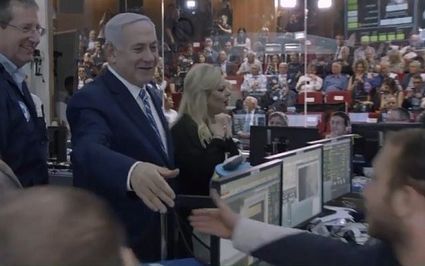 Prime Minister Benjamin Netanyahu arrives at the control center for the Beresheet landing on April 11, 2019.

President Reuven Rivlin, who had invited children to his residence in Jerusalem to watch the Beresheet moon landing, reassured the children that this "is a big and excellent achievement-that has not yet been accomplished. There is no need to be disappointed. We need to praise what we accomplished."

NASA administrator Jim Bridenstine also sent regrets of the failed moon landing via Twitter: "While @NASA regrets the end of the @TeamSpaceIL mission without a successful lunar landing, we congratulate SpaceIL, Israel Aerospace Industries and the state of Israel on the accomplishment of sending the first privately funded mission into lunar orbit."

"A[n Israeli] spacecraft will land on the moon-whole," said Netanyahu, predicting that it will happen in two to three years.