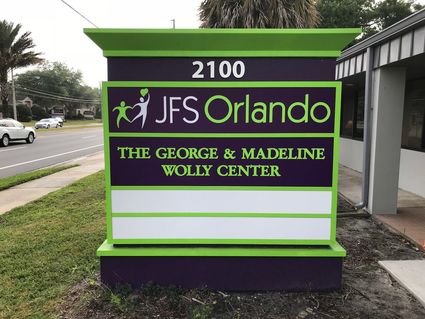 The re-dedicated sign in front of the JFS Orlando building.

On Sunday, March 31, JFS Orlando hosted A Brunch for Madeline. This was a special event held in honor of the late Madeline Wolly and all of her love and support of JFS over the years.

George and Madeline Wolly, long-time supporters and great friends of JFS, worked tirelessly to improve the quality of life for the less fortunate in the community. They began their Jewish communal work in 1985 when they both joined the JFS Board of Directors. George served as Board President from 1987 - 1989 and Madeline from 1996 - 1998. For many years, they raised funds and awareness for their beloved JFS so that the most vulnerable in the community could be helped.

To recognize their efforts, the JFS building was named in honor of the late George Wolly in 2001. When Madeline passed away last year, it only seemed fitting to add her name alongside her husband's. Included in A Brunch for Madeline was a re-dedication of the JFS building as "The George & Madeline Wolly Center."

"Sometimes affectionately called 'Mrs. JFS,' Madeline was the epitome of what JFS Orlando stands for," said Executive Director Mike McKee. "Madeline loved JFS for a reason and it's not hard to see why. This humble building on Lee Road makes the world a better place."

More than 10,000 individuals are positively impacted annually by the programs and services they receive at JFS. In 2018, the Pearlman Emergency Food Pantry provided food for more than 68,000 meals, the Counseling, Growth and Development Program provided nearly 2,400 counseling sessions, and the Reliable Independent Drivers for the Elderly program transported elderly and disabled adults to more than 600 doctor's appointments.

JFS is proud to name its building after the Wolly's and to continue the legacy of this remarkable couple by serving those in need in the Central Florida community.