San Antonio shows appreciation for the Hagees, founders of CUFI 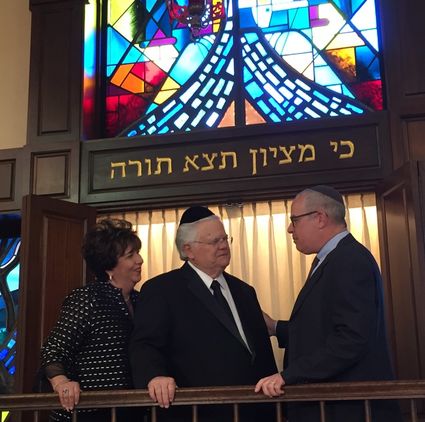 In an unprecedented event, hundreds from San Antonio's Jewish community, joined by Jewish leaders from throughout the U.S. and Israel, celebrated and expressed appreciation the past four decades of the ardent Israel support of Pastor John and Diana Hagee. Arguably, this is the first time any Jewish community came together to express true respect and appreciation for a Christian leader. This was not just a once-in-a-generation event, it's the first in any generation.

The event was historic for another reason. The Hagees have dedicated most of their lives to make support for Israel central for themselves, their ministry, and establishing that as a pillar of what it means to be a Christian. There are many ministries that are pro-Israel and lend their support and raise money for Israel. Some have been in existence for decades longer than that of Hagee Ministries'. However, Hagee Ministries is unique in its raising and disbursing over $100 million to various Israeli causes.

In addition, the Hagees made recognition of Jerusalem as Israel's capital as a centerpiece of its mission and were recognized for doing so, perhaps more than any other Christian leaders in the world, by Pastor Hagee being recognized to give a benediction at the opening of the U.S. Embassy in Jerusalem last year. Their work is historic, and no less unprecedented than the Jewish community honoring them.

Introducing one another at the outset of the formal program, Pastor Matthew Hagee and Rabbi Avraham Scheinberg brought the importance of the relationship established between their respective fathers to a new generation, in the presence of their children, a third generation. Through a video presentation and in their respective remarks, Pastor John Hagee and Rabbi Aryeh Scheinberg related the genesis of their relationship, how a friendship evolved to which they feel like brothers. This was echoed in Pastor Matt's comment about having an Orthodox Jewish rabbi as an uncle.

As Rabbi Avraham introduced Pastor Matt, the symbolism of continuing of a relationship that grew into a close friendship of their fathers was vivid. The verse from Psalm 133 that's sung in Hebrew epitomized the event, and this special relationship. "Behold, how good and how pleasant it is for brethren to dwell together in unity!"

Among the dignitaries, Israel's Consul General Gilad Katz recited a blessing that he noted he's never had the occasion to say before. This is typically said upon seeing a king, president, or prime minister and acknowledges God for "giving wisdom to flesh and blood."

Many others expressed their appreciation long distance. Governor Greg Abbot and Senator Lindsay Graham sent their greetings by video, as did representatives from several organizations in Israel that Hagee ministries has supported over the past decades. This was the tip of the iceberg-the recognition could go on for days.

Texas Attorney General Ken Paxton noted that one of the things that the Hagees deserve credit for, when pursuing a plan that's divine, it also requires hard work and the Hagees did just that. Celebrating them, he blessed them that they could now sit back and watch God's work because while the actions were those of the Hagees, "ultimately it is His plan, His work."

Echoing this, Malcolm Hoenlein, executive vice chairman of the Conference of Presidents of Major American Jewish Organizations noted that "when we follow our hearts like the Hagees taught us, we know God will do his part."

Hoenlein used a biblical example to underscore how important the Hagees' work has been. He spoke of the spies that Moses sent to scout out the Land and noted, "Today few can name the ten spies who came back with a negative report, but everybody can remember the name of the two spies who came back with a positive report. This teaches us that those who stand with Israel will be remembered forever and those who stand against Israel will be written off and forgotten."

Rabbis Aryeh Scheinberg and Pesach Lerner served as the chair and co-chair of the event. In their warm introduction of Pastor Hagee, Rabbi Scheinberg recalled the time nearly four decades ago when Pastor Hagee approached the Jewish community to put together the first Night to Honor Israel. Some in the Jewish community looked at Pastor Hagee with suspicion. In his advocacy to work together, Rabbi Scheinberg recalls imploring, "We know how to deal with our enemies but what if this guy is our friend?"

Ultimately this was born out and Rabbi noted, "No attempts were made to proselytize or to denigrate the Jewish community." And he concluded, "God doesn't perform miracles because we deserve them but because we need them. And we sure needed Pastor Hagee."

Rabbi Lerner noted that through his ardent support of Israel, Pastor Hagee "risked his life, his future, and his family."

Rabbi Scheinberg added that in his lifetime, he's been blessed to see many miracles including Israel's rebirth, the reunification of Jerusalem, recognition of Jerusalem as Israel's capital and no less significantly the rise of Christian support for Israel embodied by the Hagees, CUFI, and its 5.6 million members. He included in the miracles the emergence of the "friendship of a rabbi from Brooklyn who didn't find a friend but a brother."

In addition to presenting the Hagees with gifts including a 410-year-old Bible, and antiquities from the time of King David, they also presented a check for $75,000 to CUFI.

In response, Pastor Hagee spoke personally and emotionally. He shared how he paid a price for his support of Israel including being called a heretic, which he noted "is the accusation of teaching people things that will damn them to hell. It's like being told to go to hell in a special way." Yet he expressed no regrets and only affirmed his calling. He shared how "the return of the Jewish people to Israel was the greatest miracle in the 20th century," and reminisced as an eight-year-old boy hearing his father saying that Israel's rebirth under Jewish sovereignty "proves that the Bible is true."