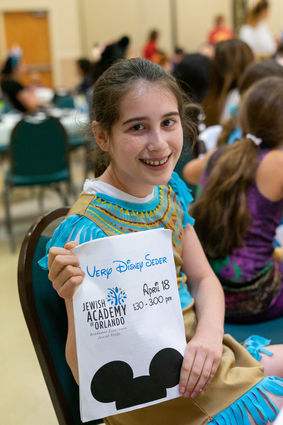 Jewish Academy of Orlando held a Disney-themed Passover model seder for its students, parents and guests. The students told the story of Passover in a traditional way with the four questions, traditional meal, and songs. The Disney-themed costumes, songs, and decorations added to the excitement.

Students dressed as their favorite Disney characters including Peter Pan, Mickey, Captain Hook, and the princesses; even the faculty and staff participated.

From the Mickey Mouse Club to Pocahontas and The Lion King, the students sang Passover-themed songs set to Disney melodies to tell the story. The Kindergarteners performed the traditional four questions while the first graders acted out the ten plagues.

"The seder requirement/commandment is to tell the story of Passover," said head of school Alan Rusonik. "Our goal was to do so in a way that engaged every student. By using the Disney songs we were able to tell the story in a fun and exciting way that related to students of all ages."

Rusonik added, "Last year's Harry Potter seder was a resounding success, as it too told the Passover story in an extremely engaging way.  We had to top it with a theme that truly excited our students. Thanks to our amazing faculty who pulled off yet another amazing seder!"

Jewish Academy of Orlando serves central Florida students of all faiths from grades kindergarten through fifth. The school delivers a whole-child education fostering academic excellence and character education rooted in Jewish values. Jewish Academy of Orlando is accredited by the Florida Council of Independent Schools. Beginning in fall of 2019, the school will offer a transitional kindergarten.