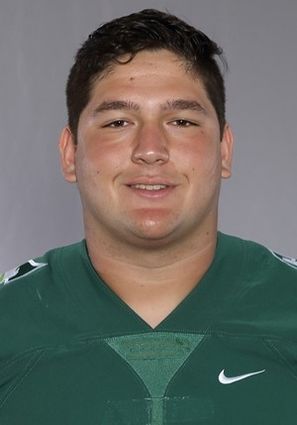 For three years, I was an offensive lineman for the Stetson Hatters Division I football team. We came together every Saturday with one common goal-to win.

Our team had 100 players. Early morning practices, roughly 2.5 hours each weekday, were embedded into our weekday routines. Saturday, of course, was game day.

When we played in our home stadium, my teammates and I were greeted by the roar of fans dressed in green and white, our school colors. Our away games took us across the country-North Carolina, Iowa, California. Football made me feel like I was a part of something that was bigger than myself.

Even when I wasn't on the field, football was still a central part of my life. My friends were football players. My conversations were about football. My down time was spent watching professional football or playing video games related to football. It was all I cared about.

But my time as an offensive lineman was cut short.

A cyst on my brain forced me to call it quits on the field after playing only four games my junior year. I was born with the cyst, but I wasn't aware of it until sophomore year, when I was at the peak of my college football career.

I was overcome with a mix of emotions-confusion, sadness, emptiness, loneliness. Football made me feel whole and purposeful. Unable to play, my self-esteem plummeted.

I asked myself, "Who am I without football?"

I was still in a rut when I received a text message from Sam Friedman, the executive director at Stetson University Hillel. He wanted to meet me.

Although I always felt a connection to Judaism, it had weakened over the years because most of my time was dedicated to football. I decided to meet with Sam. We talked about my upbringing, my Judaism and my retirement from football.

When Sam invited me to spend Shabbat at Stetson Hillel, I was hesitant. I hadn't attended a Shabbat service or dinner since high school, but I decided to go.

My worries disappeared when I met other Jewish students that Friday night. We had meaningful conversations about our interests and our Judaism over Shabbat dinner.

I realized that I liked Hillel, and I wanted to become more involved. I became a regular at Shabbat and began attending events, such as Stetson Hillel's Chanukah celebration.

Becoming involved in Stetson Hillel also helped me realize the importance of a Jewish community in times of joy and sorrow. A few days after the synagogue shooting in Pittsburgh last year, Stetson Hillel students organized a memorial service on campus, held at the historic Holler Fountain on a warm evening in October. I was responsible for lighting each of the 11 tea light candles we used to commemorate the victims. It brought me closer to my Jewish community at Stetson.

Stetson Hillel gave me an opportunity to reconnect with my Judaism. I discovered who I was outside of football. And football no longer defined me.

Over time, Stetson Hillel became my new team and the students-my friends-became my new teammates. I realized that I didn't have to wear a jersey to feel that I was part of something bigger than myself.