What will Trump's new UN pick bring to the pro-Israel community? 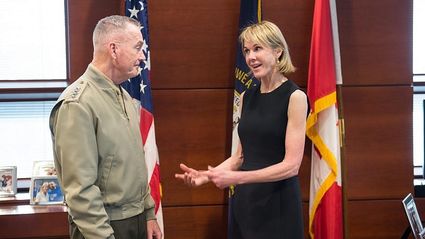 (JNS)-With U.S. President Donald Trump nominating Acting U.S. Ambassador to the United Nations Jonathan Cohen to be U.S. ambassador to Egypt, the nomination of Kelly Craft, announced in February, might finally be submitted to the Senate in the near future. That would enable the continuation of the administration's pro-Israel agenda at Turtle Bay, which has included calling out the anti-Israel bias long associated with the United Nations, as well as withdrawing from the U.N. Human Rights Council and defunding U.S. assistance to the United Nations Relief and Works Agency for Palestine Refugees in the Near East.

Craft, 57, who served as a U.S. alternate delegate to the United Nations under U.S. President George Bush and currently serves as U.S. Ambassador to Canada, has not made any public statements about Israel or the U.S.-Israel relationship. The Kentucky native and her husband, Joe, who is a coal magnate, are major Republican donors, and are close to fellow Kentuckian and U.S. Senate Majority Leader Mitch McConnell.

The U.N. ambassadorship is expected to be downgraded from a Cabinet-level position.

Britt Brockman, a leader in the Louisville Jewish community, knows Craft and her husband personally, and has served with her on the University of Kentucky's board of trustees.

He told JNS that Craft was once with the American Israel Public Affairs Committee on a trip to Israel and has previously met Israeli Prime Minister Benjamin Netanyahu.

AIPAC has a longstanding policy of not commenting on presidential nominations.

"She supports President [Donald] Trump's positions on Jerusalem being the capital of Israel and putting our embassy there," said Brockman. "She supports the president's position regarding [Israeli annexation of] the Golan Heights."

U.S. recognition of Jerusalem as Israel's capital was declared by Trump in December 2017, with the embassy move taking place five months later. Trump announced the recognition of Israeli sovereignty over the Golan Heights in March.

'She's going to give it her all'

While Craft, if confirmed, would continue to echo the Trump administration's stances at the United Nations, her style, according to Brockman, would be quite different than that of her outspoken predecessor, Nikki Haley. (Brockman offered nothing but praise for Haley's tenure, which was highly regarded by Israel.)

"She would not be someone who's trying to gain and get the limelight, but [who] wants to get the job done," he said. "She works hard behind the scenes, not trying to get personal glory."

"I do not think that Ambassador Craft takes any job lightly, and that she's going to give it her all," he added. "She's going to use much information. This has been her habit in every way I've ever known her, but she is going to be well-prepared, and if there are topics about which she needs to be better prepared, she'll surround herself with those who can help her."

In terms of style, Brockman said Craft "will bring her own personality," which he specified as "subdued" but "very well-received by leaders," including Canadian Prime Minister Justin Trudeau.

Her stances on Israel-related issues such as the Iran nuclear deal are unknown. Craft declined to be interviewed by JNS ahead of her nomination hearing.

Brockman isn't the only one looking forward to Craft's nomination.

"With her previous experience as part of the U.S. delegation to the 61st General Assembly, Craft is no stranger to the United Nations," Israeli Ambassador to the U.N. Danny Danon told Jewish Insider in February.

"The sooner the ambassador steps in, the better it is-not only for Israel, but for the U.S. and the standing for the U.S. at the U.N. I look forward to working with the new ambassador," he told JNS in March. "We are not worried that there will be any change in policy whatsoever.

"Congratulations to Kelly Craft. She's done a great job representing us as @USAmbCanada and we know she'll be a strong voice for America at the United Nations. #USstrong," tweeted Haley.

Congratulations to Kelly Craft. She's done a great job representing us as @USAmbCanada and we know she'll be a strong voice for America at the United Nations. #USstrong???????? https://t.co/5zude3JVXs

"Kelly Craft is a committed friend to Israel, and we congratulate her on her appointment as U.S. Ambassador to the United Nations," Shimon Koffler Fogel, CEO of the Toronto-based Centre for Israel and Jewish Affairs, told JNS. "We expect that the transition will be seamless, ensuring continuing U.S. support for Israel at the U.N. and its agencies. We wish her well and will miss her in Ottawa."

Brockman added, "I think she will espouse the viewpoints of the president and vice president as relative to their views on Israel."

In other words, he said, "I think there will be no surprises."