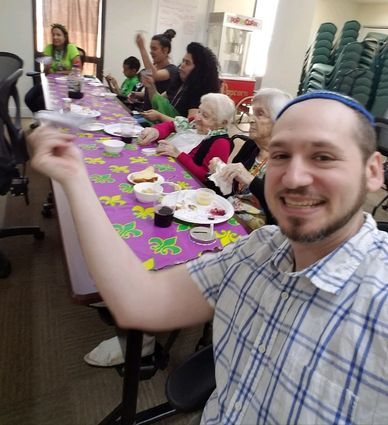 A selfie by Cantor Lance Rhodes at a recent Jewish Pavilion program.

Late winter and early spring, with the festive and fun holidays of Purim and Passover to celebrate, is a very busy time for Jewish Pavilion program directors, who each plan and lead dozens of programs in just a few weeks. For Cantor Lance Rhodes, the Jewish Pavilion's newest program director, beginning his job just before the Purim holiday was a wonderful way to introduce himself to the residents and staffs of the south Orlando facilities he now serves.

Part of what made his March beginning so special was the opportunity to see Walter Goldstein do what he does best-entertain and connect with the seniors. Goldstein had been South Orlando program director for several years but recently resigned to focus on his health, and he spent much of March introducing Rhodes to the various facilities now under his purview and imparting the nuances of the job.

"Walter's been such a great mentor," said Rhodes. "He's a great entertainer and is excellent at relating Jewish concepts in simple terms that everyone can connect to. I'm really grateful he was someone that I could learn from."

With April came Passover and 10 seders for Rhodes to plan and lead. As anyone who's ever hosted a seder knows, it's a big job with a lot of details to take care of and many types of foods and other indispensable items to procure and prepare-and most people only host one or two seders in a year! So Rhodes was pleased to find that he had such enthusiastic cooperation from staff at the facilities.

He brought along some of the specialized items, such as the shank bone and roasted egg, himself because he likes to be prepared. "Especially for Passover, it's easy to forget little things because there's so much involved," he said. But he also got in touch with facility staff well before the scheduled dates and asked them to supply a detailed list of items.

"For the most part, it really went well, and the living centers and activities directors really did a great job of providing what we needed for the Passover seders," Rhodes said. "Some of these facilities went all out," serving full and beautifully prepared meals of matzo ball soup and roast chicken, with sides, appetizers and dessert.

Of course, as he learned, when communicating with people who do not share your background and heritage, there's always a chance of a cultural misunderstanding. For example, Rhodes found that in two places, his suggestion that they serve something as familiar to him as a chopped liver appetizer was misinterpreted, although with the best intentions: one place served liverwurst that had been chopped, and another served chopped hearts instead of chopped liver. "It made for amusing moments that added to the whole spirit," he laughed. "But I really did appreciate the effort."

As a clergy member, leading the seders was a meaningful experience for Rhodes. It was also a very natural setting in which to begin to get to know the seniors he now serves. "I thought it was really cool to share different stories of traditions," said Rhodes. "I would share a personal story about when we used to sing 'Dayenu' with my family growing up: the adults would sing it louder and faster as the kids got closer to finding the afikomen. The residents would also share stories-similar but different-about what they would experience in their seders. It was really fun to get to know them in that way."

Residents recalled preparing foods for the holiday or other ways of celebrating that were special to their families. "Someone told a story about how someone pretended to be Elijah at their seder-he came into the room and held up the glass at the seder table," said Rhodes.

Being served familiar and beloved foods that are not normally on the menu in the facilities was clearly meaningful to the seniors. For example, Rhodes found that the "fruit slice" candies the Jewish Pavilion provides for the seders-Passover staples for decades-evoked delight and nostalgia in many of the residents.

Most of all, the seniors appreciated the opportunity to retell the story of Passover and participate in the seder. "I saw a lot of smiles and a lot of happiness," sRhodes said. "You could see that we were bringing meaning to the lives of the residents there. Whether they were Jewish or not, everyone seemed to have a great time and seemed to be grateful for what we were doing."

Also having rewarding experiences were a few new volunteers who had arranged to come to one of the seders after seeing the upcoming events publicized. "You could see that they really enjoyed volunteering," said Rhodes. "They wanted to come back and do more."

As he returns to the facilities over the next few months, Rhodes said, "I'm hoping to get more familiar with all the residents and volunteers, because I'm still relatively new and learning faces and names." He added that as he gets to know the staffs and has conversations with them, many have expressed surprise that the Jewish Pavilion does so much for the seniors as a free service, and he feels fortunate to be part of a great team that is doing such meaningful work.

"It's really nice to have something like the Jewish Pavilion in Central Florida, because there are so many residents who are looking for a way to celebrate the holidays-and to have experiences that they would otherwise be missing out on if we didn't have Jewish Pavilion."

He was happy to see that the activities directors value the Jewish Pavilion and were eager for him to return. "It's something they felt was really effective for their residents."