March of the Living founder: 'The only thing worse than Auschwitz is the world forgetting Auschwitz' 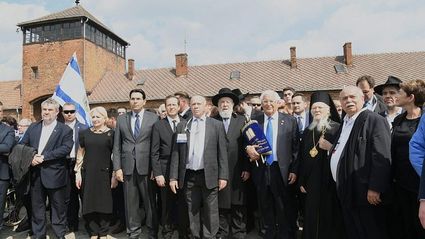 Dr. Shmuel Rosenman, founder and co-chairman of March of the Living, is flanked by Israel's Ambassador to the United Nations Danny Danon; Jewish Agency chair Isaac Herzog; U.S. Ambassador to Israel David Friedman; and a delegation of U.S. ambassadors and White House representatives headed by Friedman, including former Israeli Chief Rabbi Israel Lau, and Ecumenical Patriarch Bartholomew I, Archbishop of Constantinople, at the entrance to Birkenau during the 31st annual March of the Living.

(JNS)-On Holocaust Memorial Day (Yom Hashoah) on May 2, under the theme "Say No to Anti-Semitism," more than 10,000 Jewish and non-Jewish youth from 40 different countries, together with dozens of Holocaust survivors and dignitaries from around the world, participated in the 31st annual International March of the Living to pay tribute to all victims of the Holocaust and call for an end to anti-Semitism.

A delegation of U.S. ambassadors and White House representatives, headed by U.S. Ambassador to Israel David Friedman, and a distinguished delegation honoring Greek Jewry, which was almost completely annihilated by the Nazis and their collaborators, headed by Ecumenical Patriarch Bartholomew I, Archbishop of Constantinople and the Speaker of the Greek Parliament, Nikos Voutsis, joined the thousands of international participants on the two-mile walk from Auschwitz to Birkenau.

"In taking part in the March of the Living, you are marching at a time when a growing wave of anti-Semitism is yet again sweeping the world. But in truth, anti-Semitism never really disappeared; it simply lay barely hidden under the surface waiting for the right time to strike again. And strike it did-in deadly fashion-at the [Tree of Life] synagogue in Pittsburgh last year, and just a few days ago, on the last day of Passover, at the Chabad synagogue in Poway," said Dr. Shmuel Rosenman, founder and co-chairman of the March of the Living, while addressing the participants just prior to the march.

"But today, on Yom Hashoah, we gather together in Auschwitz to mourn our 6 million ancestors, a third of the entire Jewish people, who were murdered in the most unprecedented genocide in history. Today, we proclaim to our enemies with a loud and clear voice: We shall not be defeated! We will return here year after year to raise our voices against anti-Semitism and, indeed, against all forms of racism and hatred. As a survivor of Auschwitz once said, the only one thing worse than Auschwitz is if the world ever forgets that there was an Auschwitz. We promise to never allow that to happen."

Jewish Agency chair Isaac Herzog also led a Jewish Agency delegation behind a far-reaching international campaign against anti-Semitism. In addressing the crowd at Birkenau, he called on world leaders to fight the rampant anti-Semitism erupting the world over, specifically highlighting the dramatic rise of hate crimes against Jews in Europe. "It cannot be that 74 years after this wretched war, Jews are once again unsafe on the streets of Europe. Jews cannot be murdered in Pittsburgh and Poway or anywhere! Let us heed the warning and take to heart the lessons of the Holocaust. World leaders must unite in zero tolerance for hate crimes of any kind."

"Silence in the face of helpless suffering, and the ideologies of racism and intolerance, only exacerbates this problem."

Archbishop Bartholomew I echoed the sentiments of those who spoke before him, urging global attention to the current egregious wave of unchecked racism and hate.

"It is not enough to remember the victims of the Holocaust in the face of the hatred that is sweeping the world. Silence in the face of helpless suffering, and the ideologies of racism and intolerance, only exacerbates this problem," he said. "We must do everything in our powers to prevent another tragedy like the Holocaust. The only way to accomplish this is by striking down all actions that are an affront to our basic humanity."

The ceremony also included the lighting of six torches, each one honoring a different group of Holocaust heroes.

These include the Righteous Among the Nations, who risked their lives to save Jews during the Holocaust; survivors  of the Holocaust, who picked up the pieces of their shattered world and established new families after suffering through unspeakable horrors; the more than 1 million innocent Jewish children murdered by the Nazis during the Holocaust; the countless numbers of rabbis, scholars and teachers murdered in the Holocaust, who dedicated their lives to education until the last moments of their lives; the members of the resistance, who fought to liberate Europe from the hands of Nazi Germany; and those born in the State of Israel, where the Jewish people were reborn after the Holocaust.

Other high-profile marchers and participants include Prime Minister of Romania and President of Council of the European Union Viorica Dancila; Holocaust survivor and former Israeli Chief Rabbi Israel Lau, who has accompanied every march since 1988; and members of the Premier League's Chelsea Football Club and Major League Soccer's New England Revolution, two professional soccer teams proudly supporting the #SayNoToAntisemitism campaign. In addition, Israel's Ambassador to the United Nations Danny Danon led a delegation of dozens of U.N. ambassadors from around the world, including the ambassadors of Argentina, Latvia, Guatemala and Honduras among others.