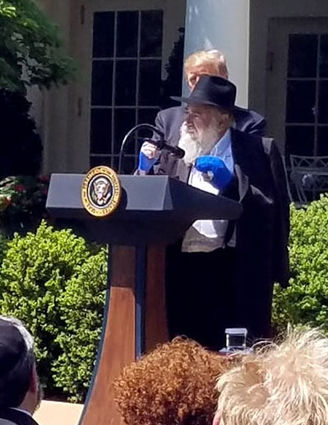 Poway-Chabad-Rabbi-Yisroel-Goldstein-White-House.jpg Caption: Rabbi Yisroel Goldstein of Chabad of Poway in Southern California speaks in the White House Rose Garden on May 2, 2019, less than a week after his synagogue was attacked by a lone gunman who killed one woman and injured three.

(JNS)-The founding rabbi of Chabad of Poway in Southern California spoke at the White House on Thursday, less than a week after his synagogue was attacked, with one woman killed and three others injured.

Chabad Rabbi Yisroel Goldstein talked about facing the shooter, 19-year-old John Earnest, even if he got killed.

He said that the Lubavitcher Rebbe, Rabbi Menachem Schneerson, taught to fight darkness with light.

"It was that moment that I made a decision: No matter what happens to me, I'm going to save as many people as possible," said Goldstein in the Rose Garden with U.S. President Donald Trump standing behind him.

"I should've been dead by now, based on the rule of statistics," he said, considering the bullet fire that injured his hands and caused the loss of his right index finger.

"But I did not stop. The Rebbe taught me: As a Jew, you are a soldier of God. You need to stand tall and fast, and do whatever it takes to change the world," said Goldstein. "My life has changed forever, but it changed so I can make change."

How the nation can overcome the tragedy, according to the rabbi, was to "introduce a moment of silence in all public schools so that children from early childhood on could recognize that there's more good to the world. That they are valuable. That there is accountability, and every human being is created in God's image."

Goldstein remarked it was advice that the Rebbe gave to his followers after U.S. President Ronald Reagan was shot in 1981.